Harvard, a college founded at Cambridge, Mass., in 1636, was named for John Harvard, a general benefactor. Opened in 1638, Harvard University now includes a large group of graduate and professional schools as well as the college and is one of the world's leading educational institutions.

After being fitted out, Harvard, in company with Noma, Christabel, Kanawha II, Sultana, and Vedette, cleared Tompkinsville on Staten Island, N.Y. (Base No. 21), on 9 June 1917, bound for Brest, France. The force arrived at St. George Harbor, Bermuda (Base No. 24) on 12 June. After coaling, she departed with Noma, Christabel, Sultana, and Vedette on 16 June en route to the Azores. Harvard arrived at Ponta Delgada (Base No. 13), in the Portuguese-held archipelago, on 26 June. While at Ponta Delgada, a fire broke out in her after coal bunker that caused minor damage necessitating slight repairs by the crew. This fire prompted a board of investigation which was convened on the 28th. The next day, she cleared the port, and raised Brest, on 4 July.

Harvard began patrol duty on 16 July 1917, in accordance with Operation Order No.1, issued by Commander, Patrol Forces (12 July). That same day she began patrolling, she rescued 59 survivors from the ill-fated British steamship Trelissick that had been torpedoed and sunk by UC-72 (Oberleutnant zur See Ernst Voigt commanding) on 15 July, after that ship had rescued some 30 men from another torpedoed British ship, Exford, sunk by U-48 (Kapitänleutnant Karl Edeling) the preceding day. Harvard returned the survivors from both ships safely to Brest. Having conveyed them to a French destroyer, she resumed her patrol duties. Just over a week later, while on patrol on 24 July, she sighted what looked like a U-boat periscope on her port bow. She engaged with seven rounds from her 3-inch guns. Not a submarine, the target turned out to be an overturned lifeboat. The yacht spent much of the next year performing numerous convoy and patrol duties, largely between the French ports of La Pallice and Brest. 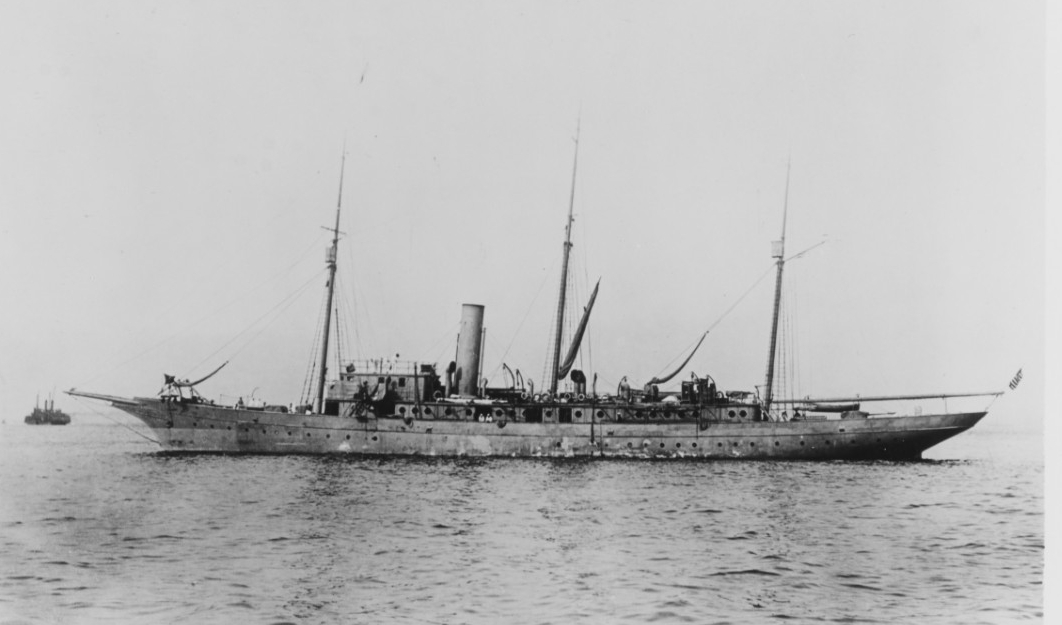 While coaling on 13 August 1917, a coal barge struck Harvard producing a 6-inch x 2-inch hole below the waterline which required plugging. The accident forced the yacht to enter dry dock for repairs. Several weeks later, on 9 September 1917, Harvard dispatched a boat to provide relief to British ship War Captain which had foundered on the rocks near Ile de Penfret, France. She later received the entire crew and landed them at Lorient, France (Base No. 19).

Continuing her duties around Brest, Harvard performed as an antisubmarine patrol and coastal convoy ship. While serving as the rear guard for a convoy, on 29 November 1917, she assisted French merchantman Texas which had been torpedoed by UB-59 (Kapitänleutnant Erwin Wassner). Having identified a sandy beach, the yacht helped ground the crippled Frenchman at the Isle de Groix, France. She ultimately, made her way into Lorient after lightening her cargo. Vice-Amiral Zépherin-Alexandr-Antoine Schwerer, Commandant Superior des Division Bretagne, expressed his appreciation for Harvard’s efforts in coming to Texas’ aid.

During the next year, she searched for survivors of Norwegian steamship Hundvaagø sunk by UB-88 (Kapitänleutnant Reinhard von Rabenau) on 4 August 1918. Just over a month later, Harvard received orders directing her to install a kite balloon winch for use with the antisubmarine apparatus. Having done so, she remained engaged in her coastwise convoy duties until the end of hostilities on 11 November.

Harvard departed for Harwich, England, via Portsmouth, England, and Sheerness, England, on 21 November 1918. Arriving on 28 November, the yacht, with members of the Submarine Commission embarked, performed duty in connection with the inspection of surrendered German U-boats. On 26 December, Rear Adm. Samuel S. Robison, Commander, Squadron Three, Patrol Force, transferred his flag from Chester (Scout Cruiser No. 1) to Harvard. She continued to perform duties along the English coast and between England and Brest in early 1919. In April and May, she steamed to the Baltic and visited Danzig [Gdańsk], Germany, and Libau [Liepāja], the latter port rent by fighting between German, Latvian, and Soviet forces. On 31 May, the Office of the Chief of Naval Operations contacted Vice Adm. William S. Sims, Commander, U.S. Naval Forces Operating in European Waters, in London, England, and stated that Harvard should be sent to New York. She returned via Bermuda in June. The yacht was decommissioned at New York and returned to George F. Baker Jr. her owner, on 26 July 1919. She was later sold to European commercial concerns and was reported to still be in service under Greek colors as late as 1948.