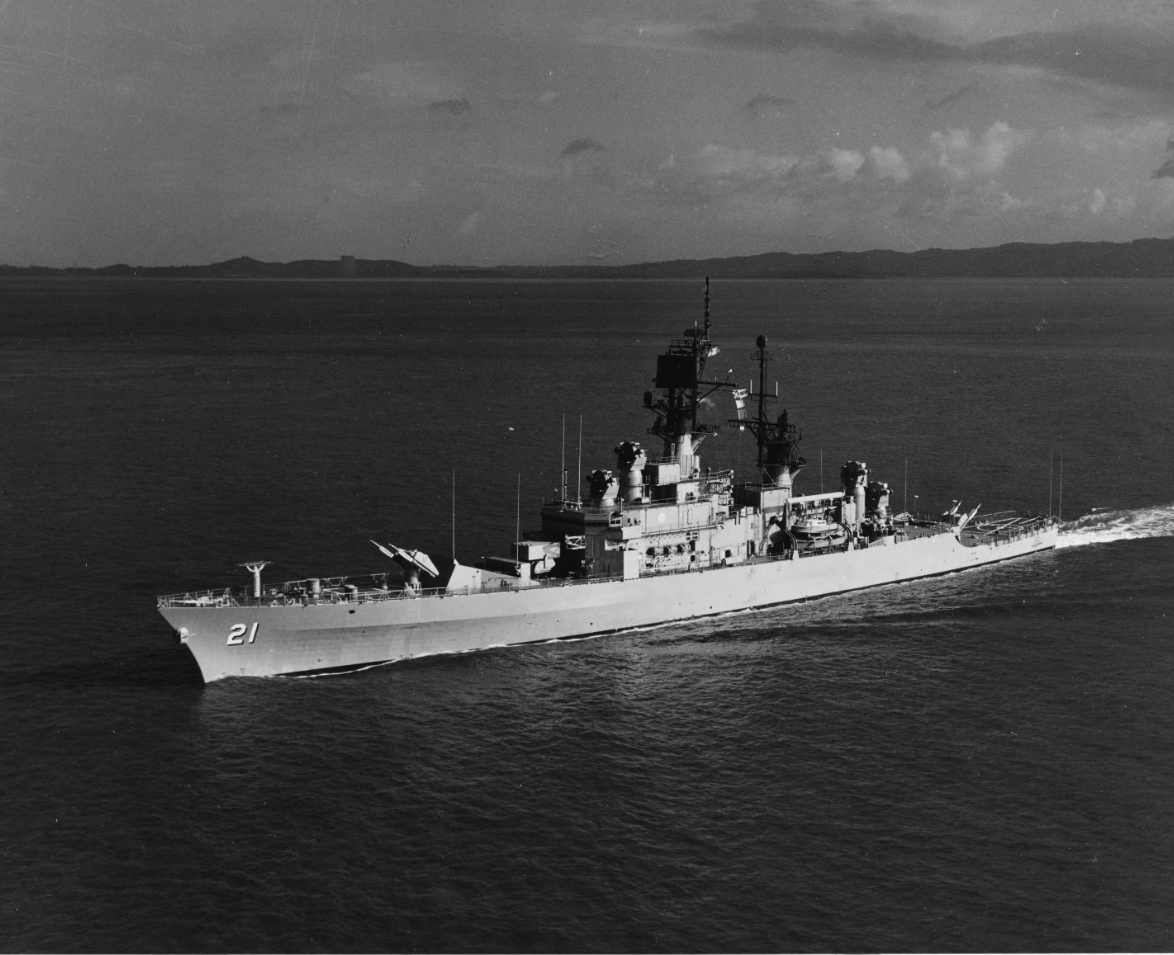 Gridley (DLG-21) underway, circa 1975. Photograph was received by the Naval Photographic Center in June 1975. Official U.S. Navy photograph now in the collections of the National Archives, KN-23568.

Charles Vernon Gridley was born 24 November 1844 in Logansport, Ind., and was appointed to the Naval Academy in 1860. Reporting for duty with his class in September 1863, Gridley joind the sloop-of-war Oneida with the West Gulf Blockading Squadron and distinguished himself with Farragut at the Battle of Mobile Bay 5 August 1864. Promoted to Lieutenant in 1867 and Commander in 1882, he spent the next 30 years at various stations around the world, including a tour as instructor at the Naval Academy. Captain Gridley took command of Olympia, Admiral Dewey's famous flagship, 27 April 1898, a post which he held despite failing health during the Battle of Manila Bay 1 May 1898. It was that morning that Dewey gave his famous command: "You may fire when you are ready, Gridley," immortalizing the doughty captain. After the destruction of the Spanish squadron and the capture of Manila, Gridley was obliged to leave his command because of his health, and died en route to the United States at Kobe, Japan, 25 May 1898. 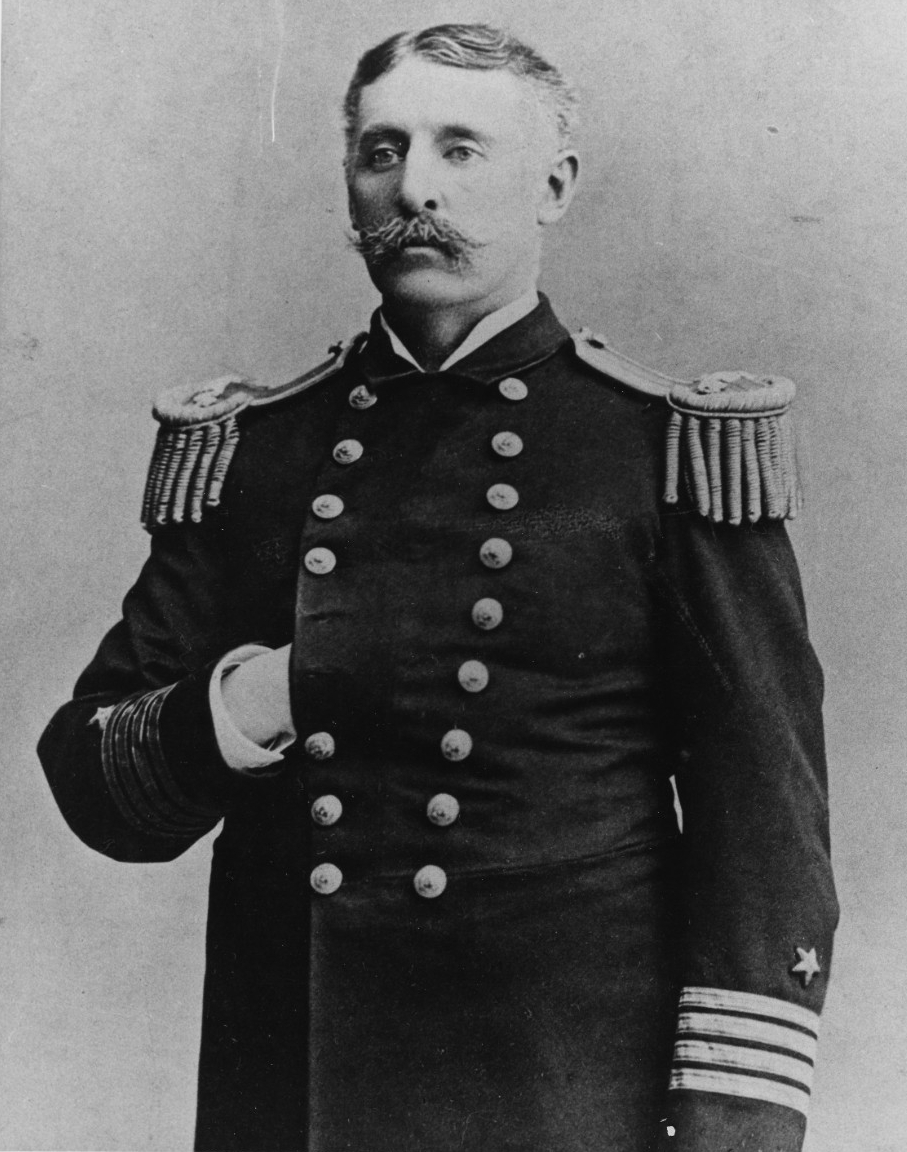 The third Gridley, a guided missile frigate, was launched by Puget Sound Bridge and Drydock Co. of Seattle, Wash., 31 July 1961; sponsored by Mrs. Stewart D. Rose, great-granddaughter of Captain Gridley; and commissioned 25 May 1963, Captain P. A. Lilly in command.

After outfitting at Puget Sound Naval Shipyard, Bremerton, Wash., Gridley made a goodwill visit to British Columbia and then conducted acceptance trials out of her homeport, Long Beach, Calif. The powerful new frigate returned to Puget Sound Shipyard 8 November to 9 December 1963, after which she joined the Pacific Fleet as flagship of Destroyer Squadron 19.

Following shakedown out of San Diego early in 1964, Gridley departed Long Beach 8 April and steamed via Pearl Harbor to Australia for commemoration of the Battle of the Coral Sea, arriving Adelaide, South Australia, 5 May. The new guided missile frigate next headed for the Philippines, stopping at Subic Bay 29 through 31 May before proceeding to Okinawa 2 June and Sasebo, Japan, on the 8th.

Heading South once more, she returned to Subic Bay and visited Hong Kong. On 4 August she got underway for the South China Sea escorting Constellation (CVA-64) to strengthen American naval forces off Vietnam after Communist motor torpedo boats had attacked destroyers Maddox (DD-731) and Turner Joy (DD-951) in the Gulf of Tonkin. But for a brief visit to Subic Bay, she remained on station serving screening and picket duty, coordinating antiaircraft warfare efforts, and relaying communications. Before she left the fighting zone 6 September, the ship's competent and dedicated service won her the Navy Unit commendation. She departed Subic Bay 7 November and reached Long Beach on the 21st.

Gridley operated along the West Coast until heading back to the Western Pacific 10 July 1965. Stopping at Pearl Harbor and Yokosuka en route, she steamed to the South China Sea to support aircraft carriers of the 7th Fleet as the flattops hammered Communist targets in Vietnam. On four different occasions in the next 4 months, she rescued pilots who ditched at sea. She returned to Yokosuka 7 December but resumed station in the South China Sea on the 22d to serve as "Tomcat," responsible for checking-in planes returning to their carriers. Early in 1966 she headed for home and reached Long Beach 1 February.

Gridley operated along the California coast until sailing for the Orient 18 November. She left Subic Bay 2 January 1967 for plane guard duty in the China Sea and the Gulf of Tonkin. After varied duties in the fighting zone, she sailed for Australia en route to the West Coast and arrived Long Beach 8 June to prepare for future action.