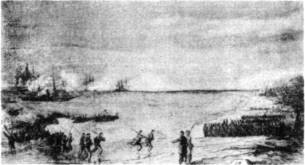 Caption: Cumberland and others at Fort Clark, N.C.

The second Cumberland (Training Ship No. 1), a steel-hulled sailing bark, was launched 17 August 1904 by Boston Navy Yard; sponsored by Miss P. Morton, daughter of the Secretary of the Navy; and commissioned 20 July 1907 with Lieutenant Commander R. D. Hasbrouck of the Naval Training Station, Newport, assigned to direct the training program on board the ship.

Towed from Boston to the Naval Training Station, Newport, R.I., she was commissioned as an auxiliary to Constellation, stationary training ship. About 200 apprentice seamen were immediately quartered on board her. She remained at Newport training landsmen and apprentice seamen until November 1912 when she was assigned to the Naval Station at Guantanamo Bay, Cuba, as station ship.

In 1914 Cumberland became receiving ship at the Naval Training Station, Norfolk. On 7 April 1919 she was ordered to duty at Annapolis and was maintained at the Naval Academy until decommissioned 31 October 1946 and delivered to the War Shipping Administration for disposal 22 July 1947.