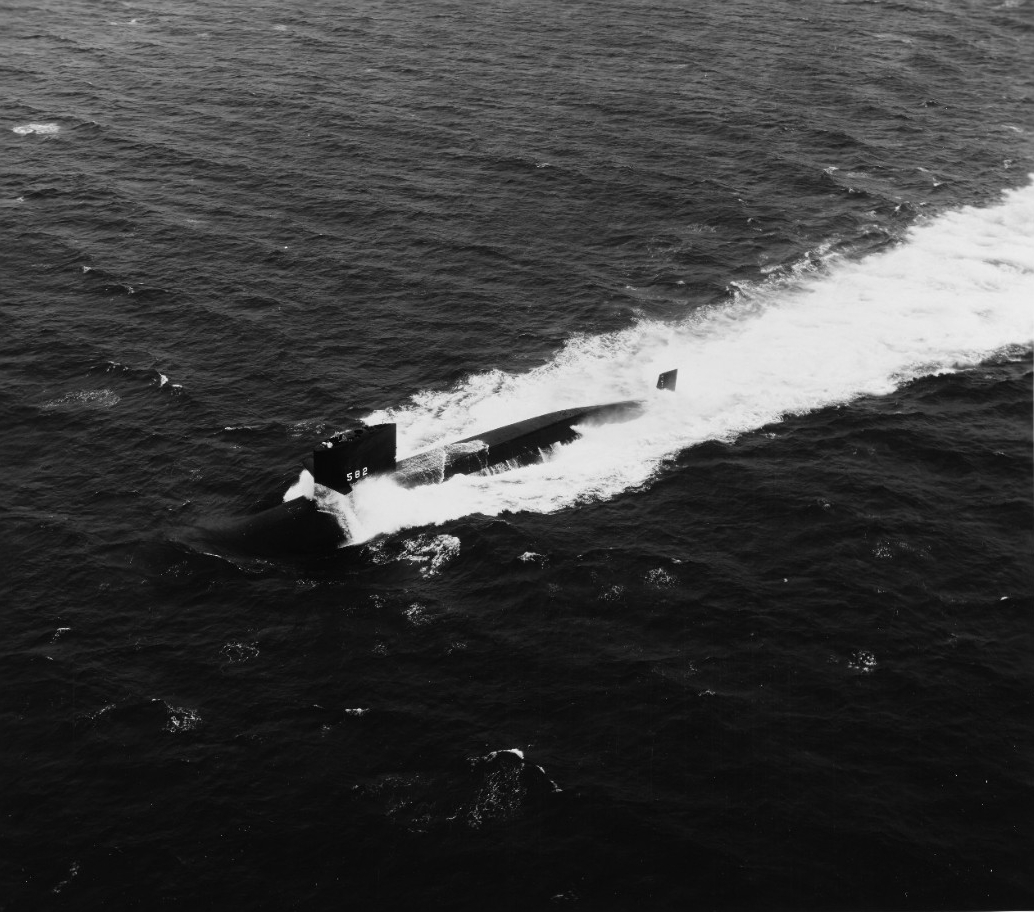 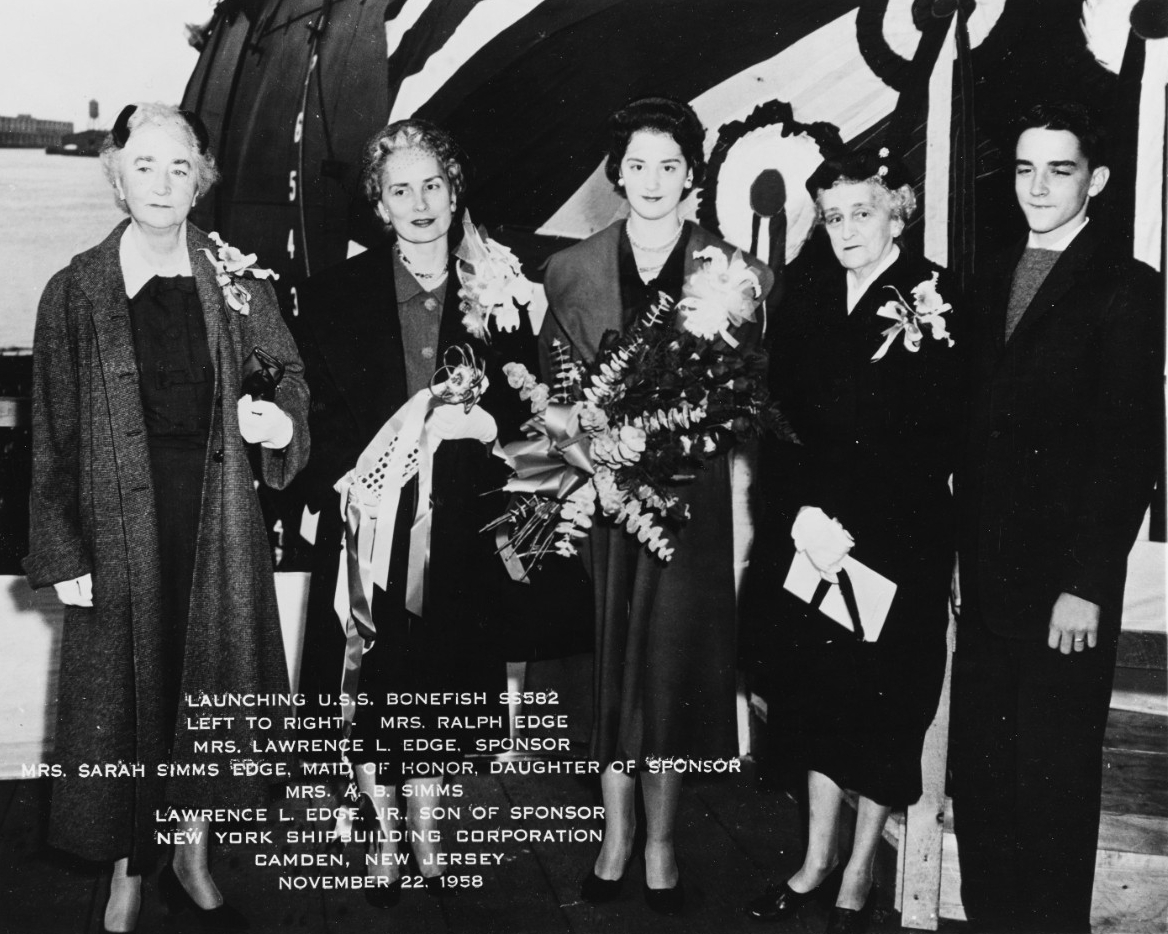 A fish of the Florida Keys and southern California. The bonefish has bright silvery sides with faint dark stripes and often reaches a weight of about 15 pounds. It feeds on bottom matter in shallow waters.

Bonefish conducted trials and training off the New England coast until the spring of 1960. On 1 April 1960, she departed New London, Conn., to join the Pacific Fleet. On 23 May, the submarine reported for duty with Submarine Division (SubDiv) 33 at San Diego, Calif. She operated out of that port until 16 September when she embarked upon her first deployment to the western Pacific. While in the Far East, the warship participated in various 7th Fleet exercises and visited ports in Japan, the Philippines, the Marianas, and at Hong Kong. Bonefish concluded her first tour of duty with the 7th Fleet on 13 March 1961 when she arrived back in San Diego. The submarine conducted normal operations out of San Diego until 4 October when she entered the Mare Island Naval Shipyard for her first regular overhaul. She completed repairs on 6 March 1962 and resumed operations along the west coast at that time.

In May, the submarine again headed for the western Pacific for a deployment quite similar to her first cruise in Oriental waters. She returned to San Diego in December and began an extended upkeep period. In February 1963, Bonefish moved to a new home port, Pearl Harbor, Hawaii. During the summer of 1963, she made a two-month cruise to the western Pacific, returning to Pearl Harbor in August. After four months of operations in the Hawaiian Islands, the submarine headed for the Far East again in January 1964. That tour of duty ended with her return to Oahu in July. Following a post-deployment standdown and local operations, she entered the Pearl Harbor Naval Shipyard for a regular overhaul.

Repairs occupied her time during the remainder of 1964, and local operations in the Hawaiian operating area took up the entire year of 1965. In April 1966, Bonefish deployed to the western Pacific for the fourth time. In addition to taking part in 7th Fleet training exercises, she also operated in the Gulf of Tonkin. The seven-month Far Eastern assignment ended in November when she reentered Pearl Harbor. Bonefish resumed normal operations after the post-deployment rest and upkeep period. That employment lasted until October 1967 when she headed back to the Orient. There the warship engaged in 7th Fleet training evolutions and made port visits at Hong Kong, in the Philippines, and in Japan. April of 1968 saw her back at Oabu resuming local operations. In September, the submarine entered the Pearl Harbor Naval Shipyard for her regular overhaul.

Repairs occupied her until June 1969 and post-overhaul trials and refresher training followed. In November, the warship voyaged back to the western Pacific, and the normal round of exercises and port visits ensued. She concluded that cruise at Pearl Harbor in June 1970. Following seven months of operations out of Pearl Harbor, Bonefish departed that port on 9 February 1971 on her way back to the Far East. Her activities included the usual port visits and exercises as well as a tour of duty with Task Force (TF) 77 in the Gulf of Tonkin. She returned to Hawaii on 10 August and, after post deployment standdown, resumed operations in the Hawaii operating area.

That employment lasted until 7 February 1972 when she began another regular overhauI at the Pearl Harbor Naval Shipyard. That repair period lasted through the year, and a material casualty to the snorkel piping system during sea trials in March 1973 extended it into July 1973. In July, the submarine went to sea for refresher training. Thereafter, local operations occupied her for the next 10 months. On 24 May 1974, she stood out of Pear1 Harbor for yet another assignment with the 7th Fleet in Far Eastern waters. Bonefish returned to Pearl Harbor from that routine deployment on 7 November and began 13 months of local operations.

On 6 December 1975, the submarine departed Oahu bound for the Orient. During that tour of duty, she participated in exercises with units of the Korean and Taiwanese navies as well as with elements of the Japanese Maritime Self Defense Force. She concluded 7th Fleet assignments on 25 April 1976 when she stood out of Subic Bay on her way home. The warship arrived back in Pearl Harbor on 15 May. After a four-week standdown and a brief period of operations, Bonefish entered the Pearl Harbor Naval Shipyard on 26 July. The repairs and modifications took nearly a year to complete. She emerged from the shipyard on 25 June 1977 to begin post-overhaul refresher training.

Bonefish conducted training out of Pearl Harbor until early November. On the 8th, she put to sea for San Diego, her new home port, and reached her destination on 18 November. She remained in port for three weeks to allow crewmen to settle into the new home port. On 6 December, the submarine began operations along the California coast. She spent the first 20 weeks of 1978 conducting various training exercises out of San Diego. On 17 May 1978, Bonefish put to sea for the western Pacific. Once again, she made the usual port visits and conducted exercises with units of friendly navies. The warship ended the deployment with her arrival back at San Diego on 28 October. She then conducted type training and other exercises along the California coast for the remainder of the year and into 1979.

During the first five months of 1979, Bonefish underwent a regular overhaul at the Pearl Harbor Naval Shipyard. On 1 June 1979, the submarine embarked upon a deployment to South America. The voyage took her through the Panama Canal to the Caribbean Sea. She visited Trinidad, Tobago, Curaçao, Colombia, Venezuela, and the Netherlands Antilles before retransiting the canal. Thereafter, Bonefish stopped in Ecuador, Peru, and Chile. Throughout the cruise, the warship conducted UNITAS exercises with the armed forces of the countries visited. At the end of the South American deployment, she resumed normal operations out of San Diego, and that employment occupied her time for the remainder of 1979 and during 11 of the 12 months of 1980.

On 8 December 1980, Bonefish stood out of San Diego on her way to duty with the 7th Fleet. The usual calls to Far Eastern ports punctuated her periods at sea engaged in training missions. The submarine ended that cruise at San Diego on 14 July 1981. Following the normal post-deployment leave and upkeep period, she resumed operations along the west coast of North America. That employment continued until 8 June 1982 when Bonefish departed San Diego on her way to the east coast. She transited the Panama Canal on 23 June and arrived in Charleston, S.C., her new home port, on 6 July. On 11 August the submarine put to sea to participate in NATO exercises in the North Atlantic. At the end of those operations, she visited Hamburg, West Germany, and Portsmouth, England, before returning to Charleston on 9 October.

Normal operations out of Charleston occupied Bonefish for the remainder of 1982 and during the first three weeks of 1983. On 25 January 1983, the submarine commenced a 14-month overhaul at the Charleston Naval Shipyard. She resumed active service in the western Atlantic and West Indian operating areas on 5 April 1984 and remained so engaged through the end of the year.