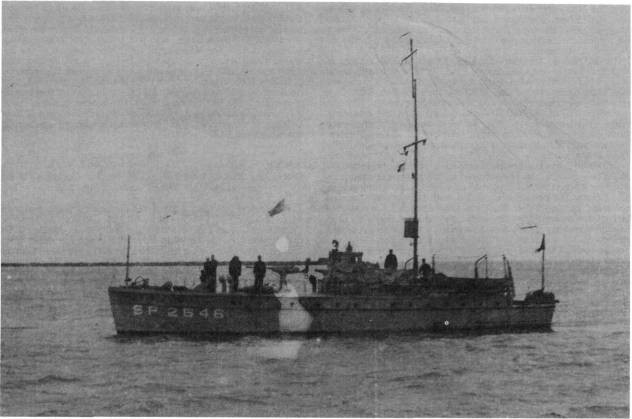 Caption: Avenger (S. P. 2646), circa 1918. Close scrutiny of the original print shows this patrol craft to have a 1-pounder mounted forward, and two machine guns flanking her pilot house. Note her tall mast and the depth charge rack at her fantail. (Naval History and Heritage Command Photograph NH 57247)

The second Avenger, a wooden-hulled screw yacht designed by J. Murray Watts and built in 1917 by Clement A. Troth of Camden, N.J., was inspected by the Navy on 11 January 1918 and acquired in May 1918 under free lease from Philips J. Wunderle of Glenside, Pa., for service in the Fourth Naval District. Assigned the identification number S. P. 2646, Avenger was commissioned on 29 May 1918 while she lay alongside Pier 19, North Wharves, Philadelphia, Pa., Chief Boatswain's Mate Philips J. Wunderle, USNRF (her peacetime owner "called to the colors"), in command.

Completing the initial phases of her fitting out by the second week of June 1918, Avenger got underway for League Island on the morning of the 10th. She did not go far before she ran aground in shoal water near the back channel. With low water prevailing, her sailors prepared to wait for the incoming tide to refloat Avenger, but three vessels unexpectedly arrived on the scene and offered assistance. With their help, Avenger was soon water-borne and proceeded to League Island.

However, since she was shipping water due to two damaged planks in her bottom, the yacht proceeded thence to Camden, N.J., for hull repairs at the boatyard of Quigley & Dorf on 11 and 12 June. After receiving new planking and a coat of paint on her bottom, she returned to pier 19, North Wharves, the next day, 13 June.

A week later, the vessel got underway at 10:00 a.m., "Captain" Wunderle at the helm, and headed back toward League Island, where she took on board her main battery, a three-pounder gun, and installed it the next day. Further provisioning and outfitting alongside pier 19 followed: there, she received the balance of her armament, a pair of machine guns and four mounts, on 5 July. She obtained signals equipment and a large searchlight on the 11th and left Pier 19 the next day for Fort Mifflin, where she took on ammunition. Later that same day, Avenger got underway for New Castle, Del., reaching her destination that evening, and remained there for the night.

Pushing on the next day, Avenger reached Cape May, N.J., her assigned section base, on the 13th, via Reedy Island. The following morning, the erstwhile pleasure craft got underway for her maiden wartime patrol, which she conducted in waters off the McCrie Shoal Buoy.

During her second patrol, (18 to 20 July 1918), she received information by wireless of enemy submarine activity near New York harbor and promptly loaded her three-pounder to be ready for action. She soon received a signal from Emerald (S. P. 177) to patrol toward the McCrie Shoal for a distance of 10 miles in search of the U-boat reported in their vicinity. In the predawn darkness on 20 July, Avenger drew within nailing distance of Emerald and received oral orders to instruct all northbound vessels to "hug the coast" because of the U-boats operating to seaward. In accordance with those orders, Avenger hailed a steamer at 2:10  a.m. on the 20th and warned that Portland-bound vessel of her danger.

At 8:25 a.m. on 7 August 1918, Avenger had just commenced escorting a submarine when a muffler exploded on board. The damage apparently not severe enough to force the craft to curtail her assigned tasks, Avenger returned to Cape May that afternoon, remaining alongside the Fish Dock there until 12 August when she got underway, at the end of a towline, bound for Essington, Pa.  Docking on the 13th, Avenger consequently underwent repairs to her hull and engines at Essington, a spell of yard work that lasted into early October 1918. During that time, so that her crew would not get "rusty" on their weapons, they conducted rifle and machine gun practice at the local yacht club rifle range.

After her post-repair trial trip to Marcus Hook and back on 9 October 1918, and her second (record) trial trip to Wilmington, Del., and return, Avenger returned briefly to Essington before moving back to her home base, Cape May, on the afternoon of 25 October. Underway the next morning, she patrolled off Cape May on the 28th and into the next day, when she was relieved on station by Shrewsbury (S. P. 70). Avenger underwent further repairs to her engines (30 October to 2 November) before she departed the Fish Dock, Cape May, at 9:55 a.m. on 7 November on what proved to be her last patrol of the war.

She made port back at Cape May on the 9th. Her deck log for 11 November recounts the happy news received that date: "State dep[artmen]t announces armistice signed at 5 a.m., Nov[ember] llth." Underway for Lewes on the 14th, Avenger returned to Cape May on the 30th and remained there a week before returning to the Corinthian Yacht Club, Essington, Pa., on the 8th of December. The next morning, she touched at Fort Mifflin to unload ammunition before mooring at pier 19, where her wireless outfit was removed and her three-pounder dismantled. At noon on 19 December, Chief Boatswain's Mate Wunderle decommissioned Avenger and signed the receipt for the vessel, which was later delivered to her builder's yard, Clement A. Troth's, in Camden, where she was presumably prepared for civilian service.

After that brief stint as a commissioned craft of the U.S. Navy, Avenger then served under a succession of owners,but retained her original name throughout. She disappeared from American yacht registers after 1929.

Rio Hudson, a C-3-type passenger-cargo vessel, was laid down under a Maritime Commission contract (M. C.  Hull 59) on 28 November 1939 at Chester, Pa., by the Sun Shipbuilding & Drydock Co.; launched on 27 November 1940; sponsored by Mrs. Warren L. Pierson; and acquired by the Navy on 31 July 1941 for conversion to an "aircraft escort vessel," BAVG-2, one of the first six such ships built for the United Kingdom under lend-lease.

Renamed Avenger by the Royal Navy and given the pendant number D.14, this ship entered service in mid-1942 and spent her entire career in the Atlantic theater. She figured in what the British historian, Stephen Roskill, called "the closing of the 'air gap'" in covering convoy runs to North Russia. Following the mauling of PQ-17, a convoy bound for Archangel in August 1942, convoy routers included Avenger in the screen of the next east-bound run, PQ-18. A dozen Hawker "Sea Hurricane" fighters and three Fairey "Swordfish" biplanes constituted her air group.

Joining PQ-18 on 9 September 1942, Avenger became the obvious target for the Luftwaffe in its attempt to cripple the convoy. Once within the range of German air bases in northern Norway, the convoy came under attack. On 13 September, waves of torpedo planes braved antiaircraft fire to deliver a successful attack, sinking eight of the convoy's 39 merchantmen. Avenger's fighters, unfortunately, were busy with the high-level bombers and shadowers-not the torpedo planes. This misdeployment of the fighters convinced Avenger's captain to conserve his precious fighters for breaking up the large swarms of torpedo planes that had proved so successful, instead of expending their energies on the less dangerous "shadowers."

On 14 September, one of Avenger's planes teamed with the destroyer HMS Onslow to sink U-589 after a 75-minute hunt.

Later that day lookouts reported Heinkel He. Ill torpedo planes closing fast. Avenger stood out at flank speed and launched six fighters. The carrier's "Sea Hurricanes," with the escorts guns, broke up the torpedo attack and splashed 11 planes, an "altogether . . . most gratifying action that caused the screen's commander to report: "It was a fine sight to see Avenger peeling off 'Hurricanes' whilst streaking across the front of the convoy . . . and being chased by torpedo bombers as she steamed down the opposite course to the convoy to take cover."

Avenger was singled out for a dive-bombing attack by a dozen Junkers Ju. 88s shortly thereafter, almost as soon as the surviving torpedo bombers had disappeared over the horizon later that day. Fortunately, the bombs fell wide of the mark while the flattop's planes, with antiaircraft fire from the escorts, downed nine of the attackers.

Ultimately, the convoy weathered the storm and reached Archangel with 27 of the original group of 39 merchantmen. The escorts and supporting ships had come through unscathed. Although the Luftwaffe, urged on personally by Marshal Goering, had sunk 10 ships (U-boats had accounted for two), they failed to score the victory they desired. Avenger had contributed much to the defense of PG-18, justifying the use of small carriers to escort convoys.

Avenger was then assigned to escort Convoy KMS-1 in Operation "Torch," the invasion of North Africa in the autumn of 1942, and supported the landings at Algiers. On 15 November 1942, a torpedo from the German submarine U-155 exploded her aviation gasoline and ammunition. Avenger sank with nearly all hands.