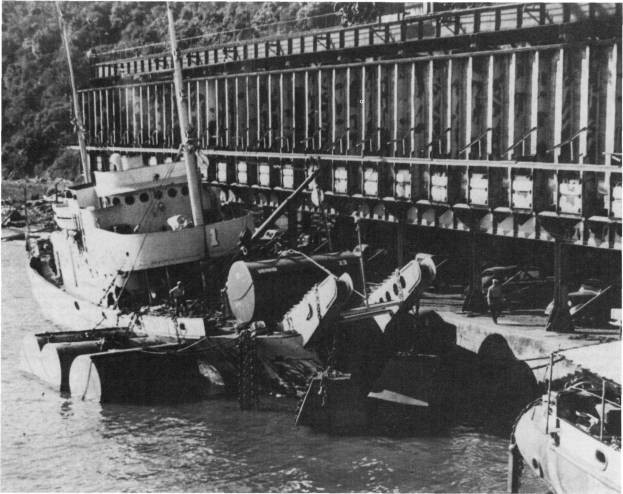 Aloe (YN-1) was laid down on 14 October 1940 at Houghton, Wash., by the Lake Washington Shipyard; launched on 11 January 1941; and placed "in service" on 11 June 1941, Lt. (j.g.) Harry R. Shawk, USNR, in charge. Allocated to the 12th Naval District, the net tender operated in a non-commissioned status in the San Francisco area from the summer of 1941 to the winter of 1942, tending and laying the antisubmarine nets and booms protecting the waters of that important region.

Commissioned on 30 December 1942, Lt. Donald B. Howard, USNR, in command, Aloe departed San Francisco on 22 January 1943, bound for Pearl Harbor. Routed thence to New Caledonia, she reached Noumea on 18 March. Six days later, she got underway and proceeded via the New Hebrides, to the Solomons. The net tender spent the remainder of the war in the Pacific, laying and tending torpedo nets and buoys, and conducting various salvage and towing operations. She ranged from New Caledonia to Okinawa and included the Solomons, Marianas, Marshalls, and Palaus in her itinerary. During this time, she was reclassified as a net layer, on 31 January 1944, her hull number becoming AN-6 on that date.

While perhaps pedestrian, Aloe's duties were, nevertheless, vital and certainly not without hazard , as was dramatically demonstrated soon after she arrived in the Solomons in the spring of 1943. On 7 April of that year, she lay moored to the Sturgis Dock, Tulagi, when 67 "Vals" (Aichi D3A2 dive bombers), escorted by 110 "Zero" fighters, all but a very few of which had been drawn from the complements of four Japanese aircraft carriers, arrived to attack the shipping in the harbor there. The raid was a part of Admiral Yamamoto's Operation "I," a series of massive air attacks aimed at American positions in the Solomons. Obviously interested in bigger game, the Japanese planes left Aloe alone, sinking a destroyer and an oiler and damaging a second oiler and cargo ship. Nevertheless, the net tender, with her solitary 3-inch gun and her four .50-caliber machine guns, contributed to the antiaircraft barrage that helped to drive the attackers off, claiming one "Val" shot down, another "possibly" splashed, and a third "damaged."

A little over a year later, Aloe next encountered the enemy during Operation "Forager," the occupation of the Marianas. While in Task Group (TG) 53.16 on 18 June 1944, the net-layer was cruising east of Guam when Japanese planes attacked at 1759. Utilizing local control and observing excellent fire discipline, Aloe's 20-milhmeter and .50-caliber batteries scored hits on three enemy planes. Two of these Japanese aircraft crashed and the third departed the area in flames.

Her last action with enemy planes came on 28 May 1945, while she was anchored in Nakagusuku Wan, Okinawa, serving as part of Net and Buoy Unit 3 (Task Unit 32.8.3). During that morning, she took a suicider under fire with all her guns as the kamikaze made a dive on the anchorage.

War's end in August 1945, found Aloe still at Okinawa. While her battle with the Japanese may have been over, there were still the "elements" with which to contend. On 9 October 1945, a typhoon swept across Okinawa. During the storm, Snowbell (AN-52) inflicted minor damage on Aloe when the former drifted down on her. Snowbell's stern collided with Aloe's starboard bow and ripped a hole below the main deck level five feet long.

Returning to the United States in the spring of 1946 via Saipan, Guam, the Marshalls, and Hawaii, Aloe commenced her preinactivation overhaul at Swan Island, Portland, Oreg., on 3 June 1946. Decommissioned on 3 August 1946 and placed in reserve on 26 September 1946, the net tender remained in the Columbia River Group, Pacific Reserve Fleet, through the 1950s. Her name was stricken on 9 October 1962. Laid up in the Maritime Administration berthing area at Olympia, Wash., the ship was sold on 14 May 1971 to I. D. Logan and was scrapped.