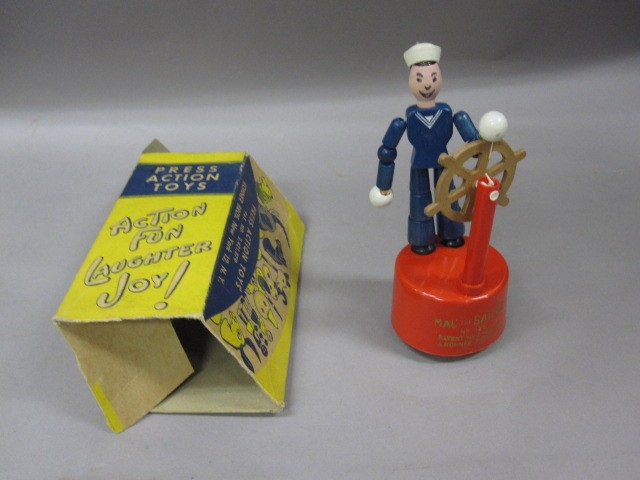 One push button puppet named “Mac the Sailor.” The figure is made of wood and is wearing a blue uniform and a white hat. His left hand is attached to a ship’s wheel. Both are mounted on a red plastic base. The front of the base is painted // Mac the Sailor / No. 126 / Patent No. 2421279 / A Kohner Product // When the button under the base is pressed, the sailor collapses at the wheel and his hat flies off. Mac is pictured with his original box.

Mac is wearing the enlisted Service Dress Blue uniform. This uniform consists of a white hat, a blue dress jumper, blue trousers, a black neckerchief, and black shoes. The blue dress jumper has a square sailor collar that is trimmed with three stripes of white tape on the edge with a white star in each lower corner. This uniform is worn for official functions such as ceremonies, parades, reviews, and while on liberty. Uh oh, Mac, you’re out of uniform! Find that neckerchief!