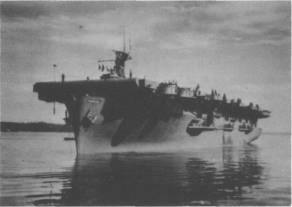 Casablanca, a port of French Morrocco, was the major base for the American campaigns in North Africa during World War II.

Casablanca reported to the Pacific Fleet and operated in the Strait of Juan de Fuca as a training ship for escort carrier crews from the time of her commissioning through August 1944. On 24 August, she cleared San Francisco, Calif., carrying men, airplanes, and aviation gasoline to Manus in the Admiralties, a base for western Pacific operations. Returning to Seattle, Wash., on 8 October, she resumed her training operations in Puget Sound until 22 January 1945, when she began a repair period at San Diego, Calif.

Putting to sea on 13 March 1945, Casablanca called at Pearl Harbor, T.H., then delivered passengers and aircraft brought from the west coast at Guam. Acting as transport for passengers, aircraft, and aviation gasoline, she operated between Samar, Manus, and Palau until 12 May, when she put back for a west coast overhaul. She returned with passengers to Pearl Harbor on 24 June, and through the summer transported sailors from the west coast to Pearl Harbor and Guam. After brief employment in carrier qualification training off Saipan in August, she carried homeward bound servicemen to San Francisco, arriving 24 September. Continuing to aid in the redeployment of Pacific forces during Operation Magic Carpet, Casablanca carried passengers on a voyage from the west coast to Pearl Harbor in September and October, and in November, made a passage to Pearl Harbor, Espíritu Santo in the New Hebrides [Vanuatu], and Nouméa, New Caledonia, to embark more passengers. Her last voyage on this duty (8 December–16 January 1946) charted a course from San Francisco to Yokohama, Japan. Casablanca cleared San Francisco on 23 January for Norfolk, Va., arriving on 10 February. There she was decommissioned on 10 June 1946, and sold on 23 April 1947.