On the day of her commissioning, St. Louis got underway and proceeded to Norfolk, Va., for final outfitting. She departed Hampton Roads on 14 February 1829 and headed for Havana, Cuba. Thence, she proceeded via Rio de Janeiro and Cape Horn to Callao, Peru. Arriving there on 20 June, the sloop of war joined the Pacific Squadron under Commodore Jacob Jones; and, until 8 September 1831, she cruised the coasts of the Americas to protect the trade and interests of the United States. On that day, she sailed for Cape Horn and the east coast; and arrived off Sandy Hook, N.J., on 9 December. She was placed in ordinary [a decommissioned status] at New York on the 25th.

Placed back in commission on 19 September 1832, St. Louis departed New York on 12 October to base at Pensacola, Fla., as a unit of the West Indies Squadron. She spent the following six years, largely as flagship for the squadron, cruising the Caribbean. On 28 May 1838, she sailed from Havana for New York where she again was placed in ordinary on 1 July and laid up until 5 April 1839.

St. Louis sailed on 30 June 1839 to join the Pacific Squadron at Monterey, Calif.  En route, she put in at San Francisco where her commanding officer interceded with the government of California for imprisoned foreign residents. She had the distinction of being the first U.S. man-of-war to carry the flag into that port. Following operations off the coast of Peru, she returned to Norfolk on 15 September 1842, and was laid up in ordinary there the following day.

Recommissioned on 27 February 1843, St. Louis soon joined the East Indies Squadron as flagship. She was at Singapore early in 1844 while the first commercial treaty with China was being negotiated. She returned to Norfolk in September 1845 where she underwent conversion to lengthen her hull by 13 feet. Departing from Norfolk on 11 August 1848, she sailed to Rio de Janeiro, where she served on the South American Station until returning in July 1851.

St. Louis next departed Norfolk on 24 August 1852 to cruise the Mediterranean. On 2 July 1853, while she lay at Smyrna, Turkey, Cmdr. Duncan N. Ingraham, her commanding officer, demanded that the commander of the Austrian frigate Hussar release Hungarian refugee Martin Koszta. The revolutionary leader had emigrated to the U.S. where, at New York, he had announced his intentions of becoming an American citizen. Subsequently, while in Smyrna on business, however, he had been arrested by Austrian officials. Mediation by the French Consul effected Koszta’s release, but for his bold conduct in the matter, Ingraham received the thanks of Congress and a medal. 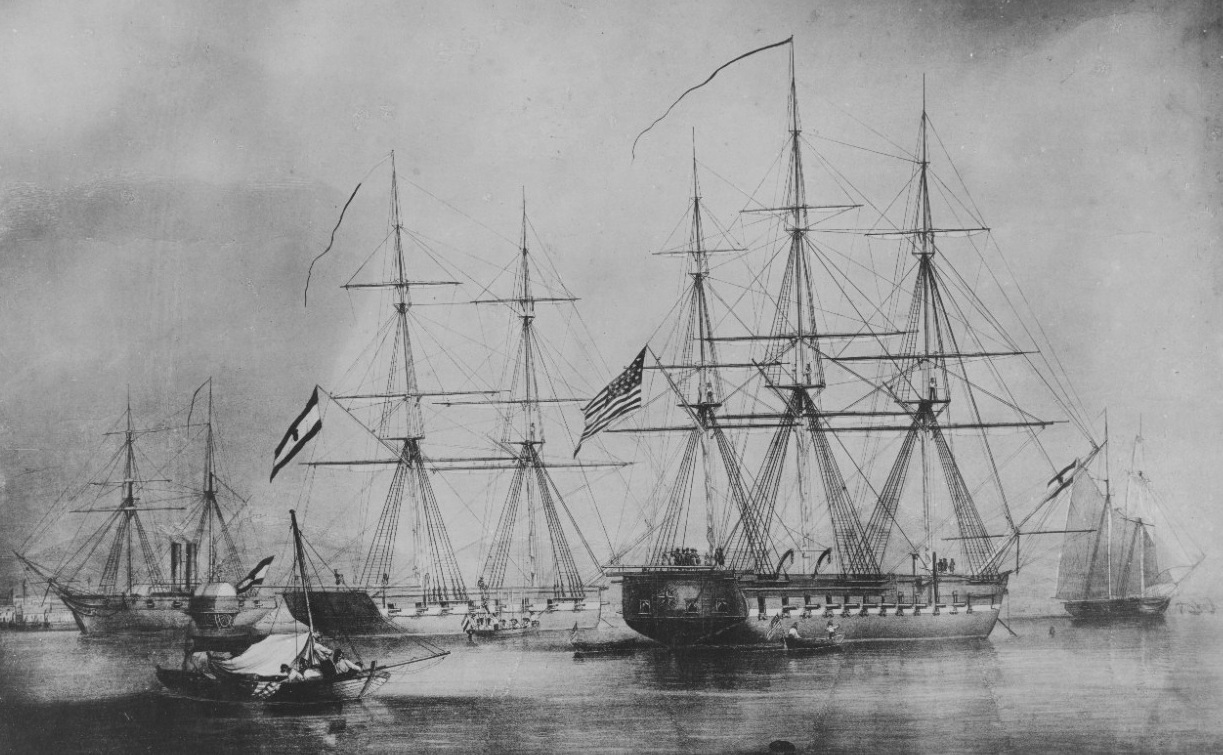 St. Louis returned to New York on 8 May 1855, and sailed again in November to help suppress the slave trade along the western coast of Africa, returning to New York on 9 February 1858. In September of that year, she joined the Home Squadron based at Pensacola.

In January 1861, while serving with the Home Squadron off Vera Cruz, Mexico, St. Louis was ordered to return to Pensacola to stand guard during the turmoil which preceded the outbreak of the Civil War. In April, she aided in the reinforcement of Fort Pickens; then joined in the massive blockade of southern ports. On 5 September, she assisted Brooklyn in the capture of blockade-running Confederate brig Macao, at the mouth of the Mississippi.

After being rearmed -- receiving 4 8-inch shell guns, 12 32-pounders, 2 20-pounder Parrott rifles, and 1 12-pounder smoothbore -- during a brief period at the Philadelphia Navy Yard, she sailed on 24 February 1862 for Cadiz, Spain. For the next two years, she criss-crossed the Atlantic, cruised the African coast, and patrolled the areas in and around the Canary Islands and the Azores in search of Confederate commerce raiders. Cadiz and Lisbon serving as her primary bases. She returned to Port Royal, S.C., on 26 November 1864, for service in the South Atlantic Blockading Squadron.

Three days later, on 29 November 1864, sailors and marines from St. Louis went ashore at Boyd’s Landing to participate in the combined Army-Navy thrust up the Broad River. Under the command of Cmdr. George H. Preble, the expedition was designed to assist Gen. William Tecumseh Sherman as he approached Savannah at the end of his march across Georgia. This operation was completed on 29 December, four days after Christmas. St. Louis then briefly returned to blockade duty before finally sailing to the Philadelphia Navy Yard where she was decommissioned on 12 May 1865.

St. Louis spent the remainder of her career at Philadelphia. After being laid up in 1866 and declared unserviceable, she became a receiving ship at League Island, being housed-over but retaining her masts.

In 1894, St. Louis was loaned as a training vessel to the Naval Militia of the State of Pennsylvania. On 30 November 1904, while she was engaged in this service, her name was changed to Keystone State. She was finally stricken from the Navy list on 9 August 1906 and sold for scrapping on 5 June 1907, to Joseph G. Hitner of Philadelphia.