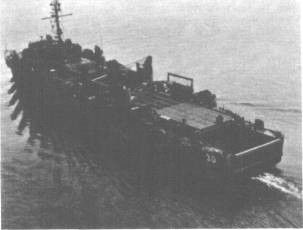 A fort at the confluence of the Minnesota and Mississippi Rivers, for many years the northernmost military post in the land of the Sioux and Chippewa.

Homeported at Norfolk, Va., Fort Snelling carried out an intensive exercise schedule along the east coast and in the Caribbean, almost always with Marines embarked for amphibious training. She made her first deployment to the Mediterranean in 1956, returning the next year again to serve with the 6th Fleet. During her 1958 deployment, she was at sea bound for the island of Rhodes when on 14 July she wasnotified to land her Marines at Beirut, Lebanon, the next day. Thus, Fort Snelling took part in the immediate response of the U.S. Navy to the Middle Eastern crisis of summer 1958. Several times more before leaving the Mediterranean she returned to the coast of Lebanon to support the Marines ashore. Through 1959 and 1963, Fort Snelling continued her training operations with Marines in the Caribbean and on the Carolina coast.