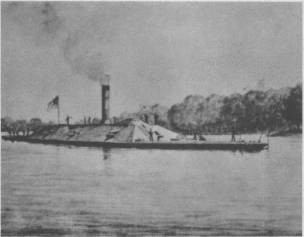 CSS Atlanta was originally the English blockade runner Fingal, built at Glasgow, Scotland, in 1861. She was procured by the Confederate Government in 1862 and converted into an ironclad ram at Savannah by Messrs. N. and A. F. Tift. This vessel, with Commander W. McBlair, CSN, in command, was active on the Savannah station, usually flying the flag of Commodore Tattnall, who lived ashore in Savannah. On 17 June 1863 she was captured at dawn in Wassaw Sound, Ga., by monitors Weehawken and Nahant.