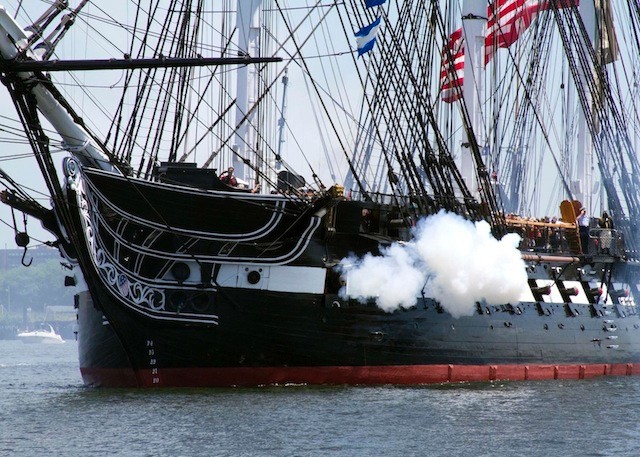 WASHINGTON (NNS) -- "The USS Constitution is a 44-gun Frigate ... built to out run or out gun anything she came across," said Cmdr. Sean D. Kearns, USS Constitution's 73rd commanding officer. "She truly is a lens from which we can examine the importance of having a Navy and the role the Navy has played in our nation's history."
{{video:/ah_online/videos/aho/1014-LastRide/thelastride_web.mp4:/media/aho/videoImg/thelastride_bp.jpg:0}}

More than 600 guests were in attendance aboard America's 'Ship of State.' This was the historic warship's final Boston Harbor cruise until 2018, as she is scheduled to enter dry dock in March 2015 for a three-year planned restoration period.

"It's a period in the ship's life where we take the time to do right by the ship and while that might mean that visitors don't get the same experience they can have today for that period of time she's in dry dock, it allows us to do the restoration repairs, and do the work that needs to be done, so that we do preserve Constitution for generations and generations," said Kearns.

The underway began with a wreath-laying ceremony in commemoration of the U.S. Navy's 239th birthday and Constitution's upcoming 217th birthday on Oct. 21, and to honor all Navy Sailors who have served and lost their lives both aboard Constitution and throughout the fleet.

Following the wreath laying, Constitution's underway attendees were led in the singing of the Star-Spangled Banner by Constitution Gunner's Mate Seaman Amada Williamson, which was followed by the ship's traditional 21-gun salute to the nation off Fort Independence at Castle Island.

On the return trip back to Constitution's berth, both crew and guests alike were treated to special live musical performances by the Boston Pops and Dropkick Murphys, respectively. A Boston Pops quintet performed two musical numbers, followed by the Dropkick Murphys playing a set of nine crowd-rousing songs from the ship's spar deck main hatch, which concluded with one of their most popular hits - "I'm Shipping Up To Boston."

"Today was an amazing and very unique experience," said Chief Boatswain's Mate Christopher Haws, a Constitution crew member. "This was the culmination of everything we, as a crew, have pushed for all year - everything we've worked toward for the future of this historic command."