Artifact In The Spotlight

During World War I, the Navy recruited over 11,000 women to serve as Yeomen (F), commonly known as "Yeomenettes." Most Yeomenettes served as typists, stenographers, bookkeepers, and other clerical duties; but some became chemists, camouflage designers, pharmacists, and other roles typically held by men. After the war, the Yeomen (F) were discharged and women remained in the Navy only as nurses.

This recently acquired artifact belonged to Yeoman (F) Lilian Haub, who enlisted on September 18, 1918. Haub served as a stenographer during her time in the Navy Reserve Force. The patch on the uniform's sleeve shows her rating as a Yeoman 1st Class. This donation was accompanied by three photographs of Haub, including one of her wearing this very uniform. 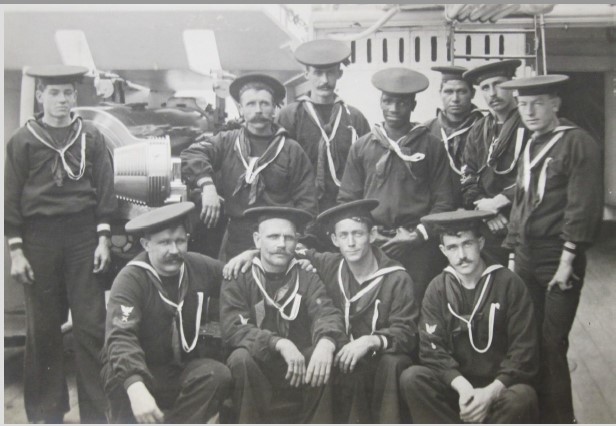 Throughout the early twentieth century, the United States Navy limited Black sailors to Mess Attendant service. As an "unseen" part of the Navy, photographic evidence of the role of Black sailors and integrated crews from this era are rare. New this month to NMAS' permanent collection is a photograph album documenting the service of USS New Orleans (CL 22).

The album dates from ca. 1899-1909, but the New Orleans served from 1898 to 1922. After the Civil War ended, the Navy restricted Black enlistment. This album provides a rare glimpse of Black sailors in service during this era. 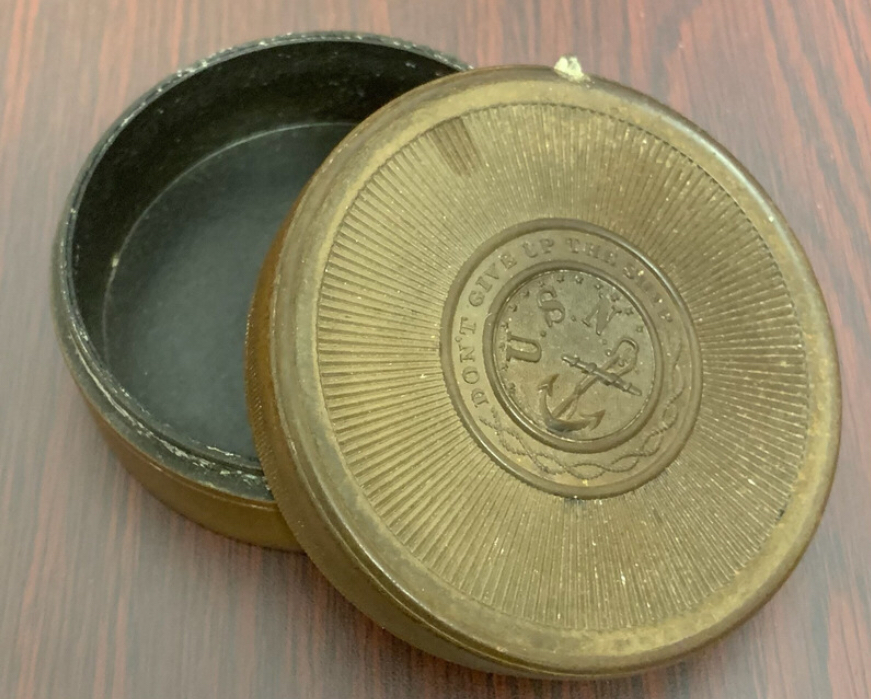 To prevent the spread of disease, the Navy issued shaving and soap kits such as this one to sailors for bathing during the Civil War. The small containers are made of gutta-percha, a latex material that was heat and flame resistant. Although seemingly sturdy, soap dishes and other personal artifacts such as these are rare because sailors frequently used them under rough conditions are sea. The inside of the dish's lid also featured a small mirror so sailors could shave with a shaving brush. The top of the soap dish's lid features Navy Captain John Lawrence's famous order to sailors, "Don't Give up the Ship." 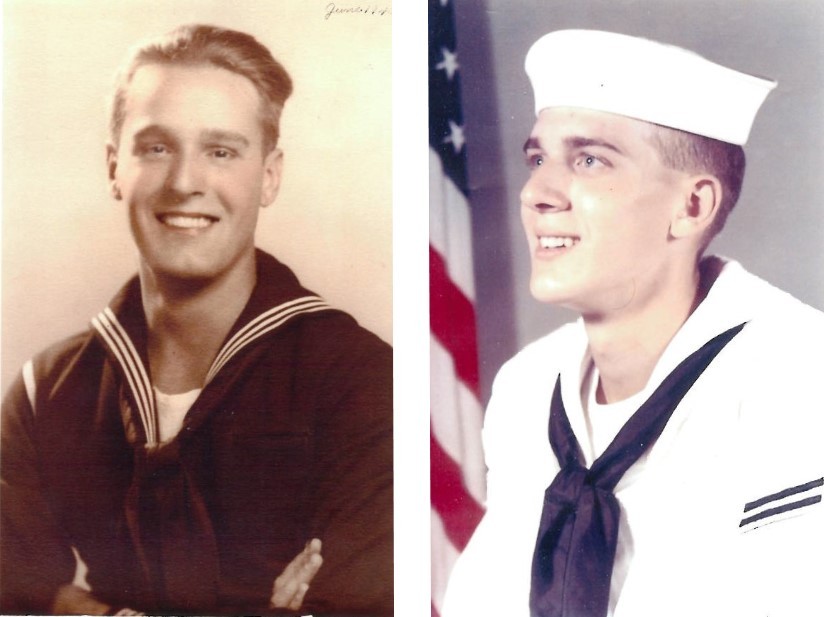 For many families, military service is a family tradition. The values of honor, courage, and commitment resonate throughout the generations. One such family represented in the museum's collection are the Benders from New Jersey.

Charles Bender enlisted in the Navy as an Apprentice Seaman in August 1938. Charles served throughout World War II, aboard several ships. At the close of WWII, Charles was aboard USS Renshaw (DD 499) in the Pacific Ocean. Charles was honorably discharged in 1945 as a Shipfitter First Class. Thirty years after Charles' enlistment, his son Geoff donned Charles' own dress blues to begin his naval service. Geoff served in the Vietnam era, aboard the USS Basilone (DD 824). Geoff finished his naval service in 1974 as a Fire Control Technician (Guns) Second Class. Today, Geoff is a volunteer at the National Museum of the American Sailor where he shares stories of both his father's and his own Navy service.

No museum collection is complete without a few curious items. This month’s artifact spotlight, a small U.S. Fleet souvenir, is a prime example. The outside case is a real walnut shell and inside are small black and white images of the U.S. Fleet c. 1920-1930s printed on a strip of paper, which is folded-up accordion style. The two halves of the shell can be tied closed with a delicate red, white, and blue silk ribbon. The original tag made by Dennison Mfg. lists the creator of this piece as Kaplan & Bloom out of New York with a 1939 copyright. Like else is known about this artifact, but it is very reminiscent of souvenirs often brought or sent home by sailors to their loved ones. 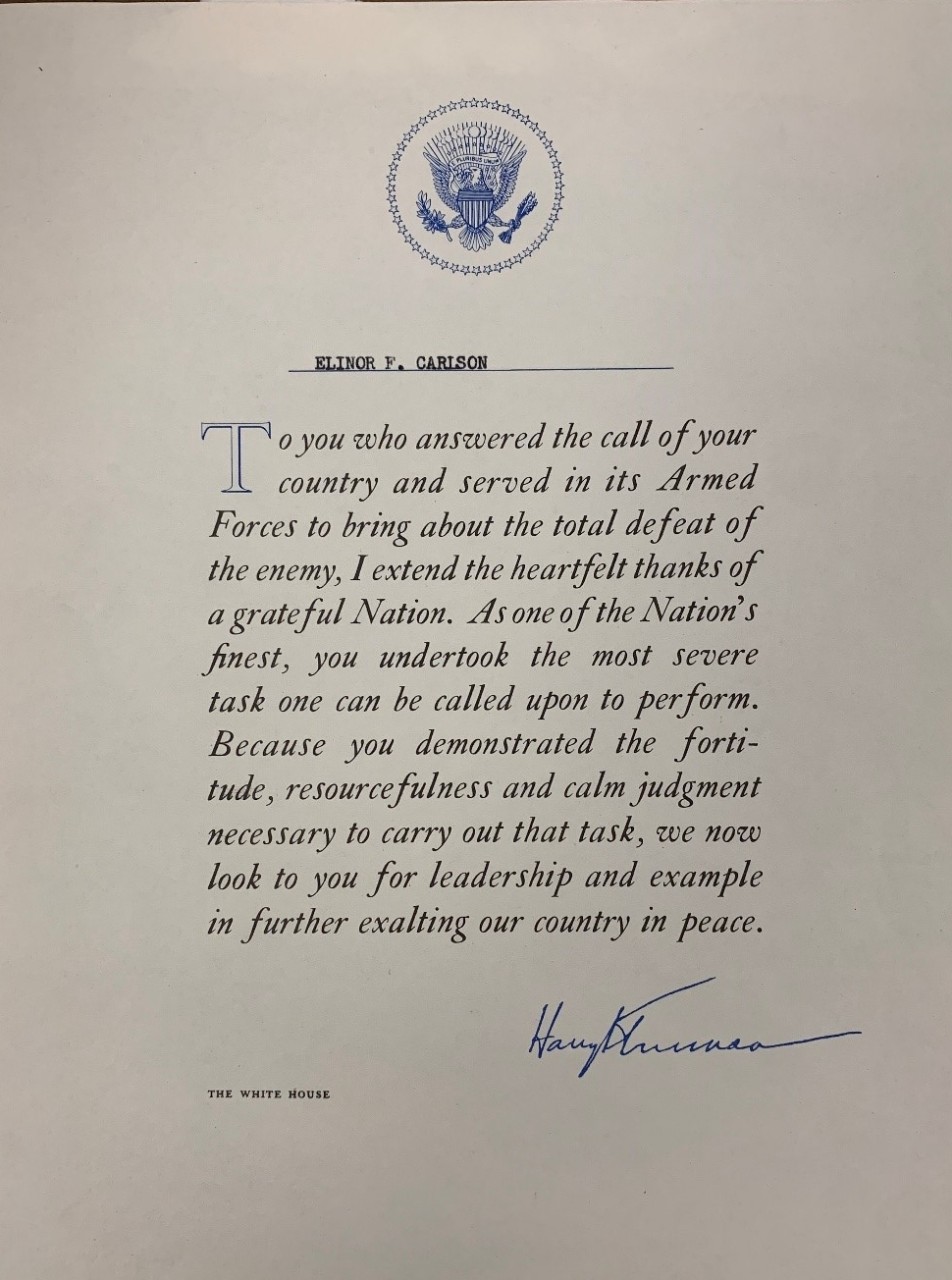 Upon an honorable discharge from the U.S. Armed Forces in WWII, every veteran received a letter thanking them for their service. The White House personalized each letter with the name of each service member and then added a facsimilie of President Harry Truman's signature. One veteran who received this token of "heartfelt thanks from a grateful nation" was Pharmacist Mate Elinor Felicia Buchanan (nee Carlson). Born in 1925, Buchanan worked as a dental assistant until she enlisted as a WAVE (Women Accepted for Volunteer Emergency Service) in 1945, the first year women could enlist. She served at Oaknoll Naval Hospital in Oakland, California until her honorable discharge on June 13, 1946. 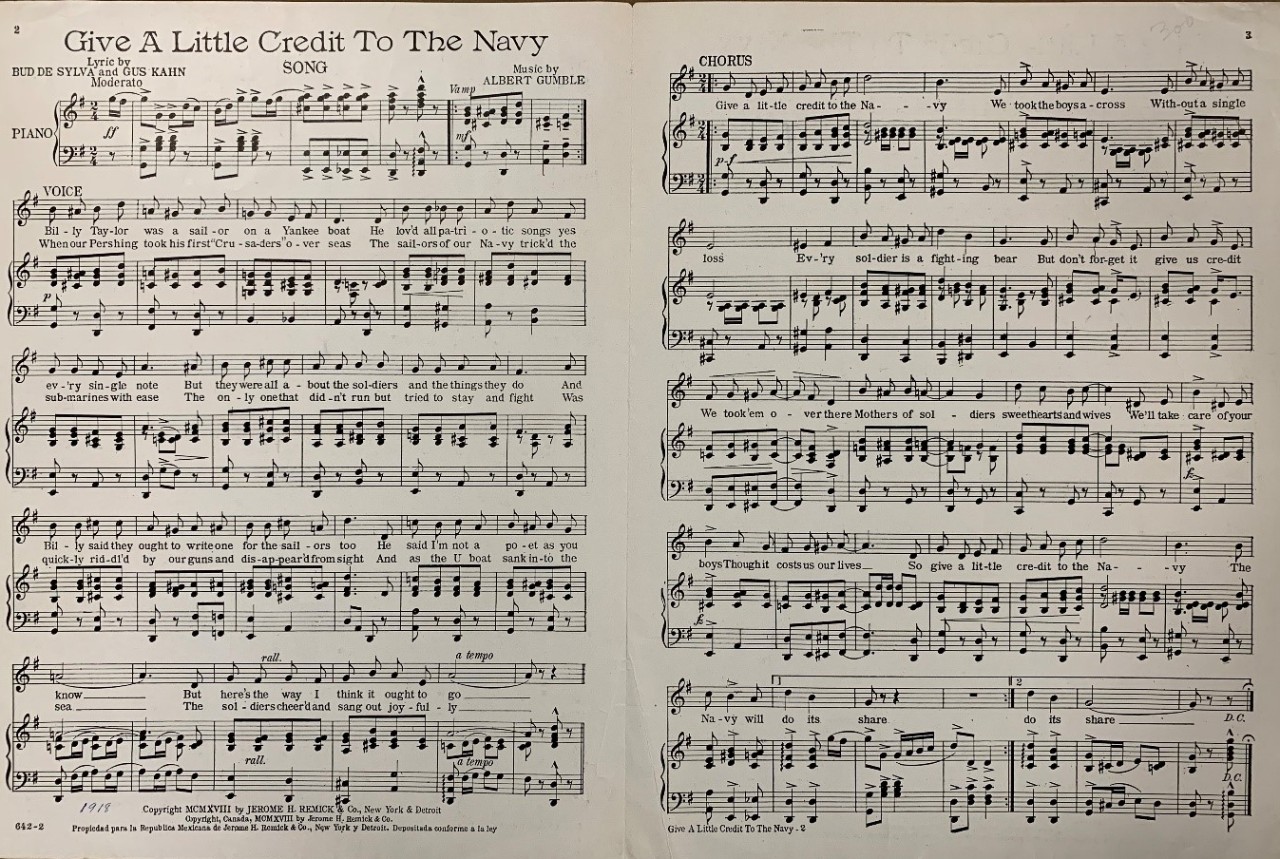 The relationship between music and the Unted States Navy goes back centuries. In the mid-nineteenth century, sailors sang maritime work songs called sea shanties to help pass the time. Other, more illustrious, songs demonstrate sailors pride in service and love of country.

This song, "Give a Little Credit to the Navy" was composed in 1918 by Albert Gumble and written by Buddy DeSlyva and Gus Kahn. Over the years, it's been performed by Navy bands around the world. Enjoy the first lines of the song below:

"Billy Taylor was a sailor on a Yankee boat. He lov'd all patriotic songs, yes, e'vry single note. But they were all about the soldiers and the things they do, And Billy said they ought to write one for the sailors, too." 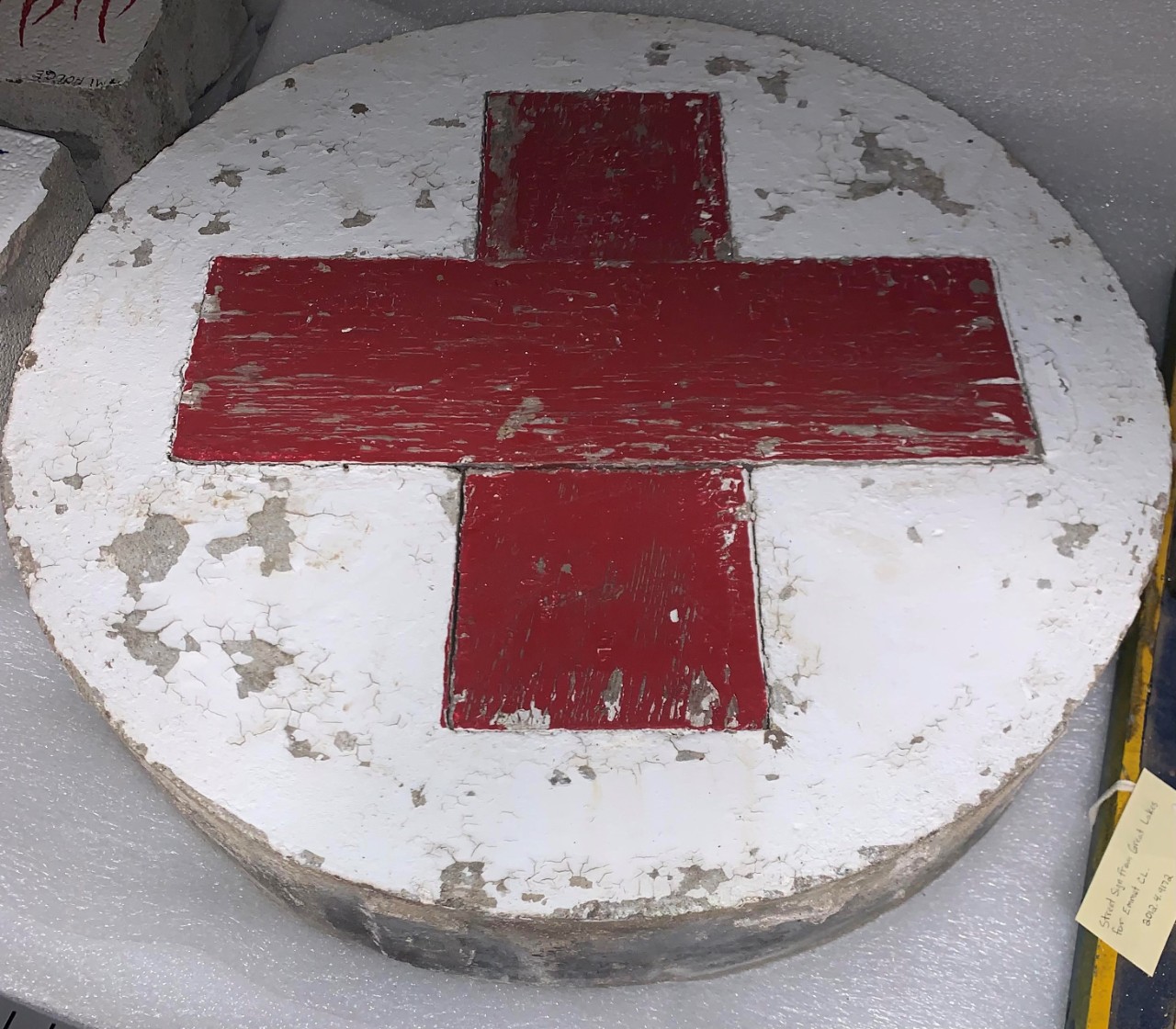 As Naval Station Great Lakes has changed over the years, so have many of its buildings. This Red Cross emblem is constructed of wood and concrete. It came from the facade of what is now known as Building 76.

Building 76 was originally constructed in 1918 for the American Red Cross as a convalescent home to aid sailors with anything from writing letters home to providing entertainment in the assembly room. Shortly after its opening, the Red Cross expanded its mission to include serving the needs of sailors' families. This changed occurred as the Spanish Flu epidemic hit the Midwest. Building 76 provided a place for relatives of ill sailors to stay during the epidemic. Sadly, the old Red Cross House was torn down in the 2000s, but the American Red Cross is still active at Naval Station Great Lakes, where they provide services to sailors and their families.