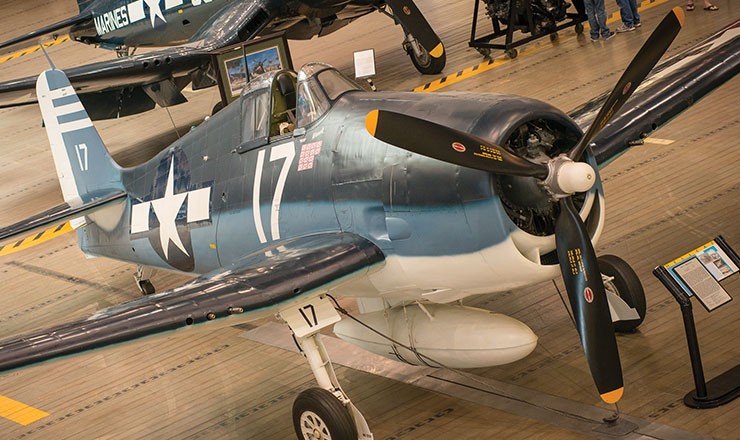 One of the top fighters of World War II, Grumman's F6F Hellcat went from the experimental stage to operational employment in less than 18 months. Its combat operations began in August 1943 in an attack on Marcus Island by Fighting Squadron (VF) 5 aboard USS Yorktown (CV-10). Outperforming the famous Japanese A6M Zero, the F6F accounted for 5,156 enemy aircraft destroyed, 75 percent of the Navy's air-to-air victories. The Museum's F6F-3 and F6F-5 recognize the Navy's top ace, Captain David McCampbell (34), and 10th ranked ace Captain Ray Hawkins (14).

The first production F6F-3 flew in October 1942, with first deliveries to Fighting Squadron (VF) 9 in early 1943, a mere 18 months from prototype to operational employment. The F6F-3 saw its first combat with VF-5, taking part in the Marcus Island raid on 31 August 1943, while operating from the carrier Yorktown (CV-10). By 1944, the Hellcat had become the Navy's standard carrier-based fighter. By then, Grumman had produced 4,403 F6F-3s, which included 150 F6F-3N and F6F-3E night fighters, and a number of F6F-3P photo aircraft.

During 1944, the F6F-5 became operational, incorporating a number of improvements (refined cowling, and improved windshield) and adding provision for carriage of a 2,000 lb. bomb on the centerline, rocket rails under the wings, and changing the wing armament on some -5s to two 20mm cannon and four .50-caliber machine guns in the wings vice the original six .50-calibers. A total of 6,681 F6F-5s were produced, including 1,189 F6F-5N night fighters and a number of F6F-5P photo aircraft. The Royal Navy procured 1,182 F6F-3 and -5 aircraft as well.

Adhering to Grumman's design philosophy to produce an aircraft in which a pilot could become proficient in a short period of time, and that was easy to operate from a carrier yet could outperform the enemy, the Hellcat was loved by its pilots. Hellcat pilots achieved an amazing 19:1 kill ratio, downing 5,156 enemy aircraft in just two years, accounting for 75 percent of the Navy's aerial victories during the war. Late in the war the Navy conducted evaluations of Allied and captured Axis fighters. The Hellcat ranked at the top in most categories, making it one of the best fighters in the war, an amazing accomplishment considering the very short design-to-production period. In just 30 months, 12,275 Hellcats were produced by Grumman at its Bethpage Plant Number 3, much of the factory still being constructed as some of the first F6Fs were being built inside.