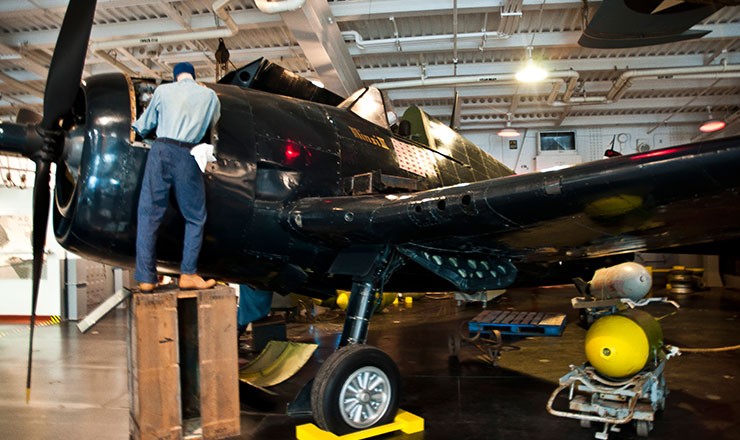 Superior to the fabled Japanese Zero in virtually every way save for rate of turn at low speed, the Hellcat was the platform upon which Naval Aviators swept the skies of enemy air power during 1943-1945. Flown by capable aviators, among them the Navy's leading fighter ace with 34 kills, F6Fs shot down 5,216 Axis aircraft in 24 months and compiled an enviable kill ratio of 19:1.

In the Battle of the Philippine Sea, nicknamed the "Great Marianas Turkey Shoot," Navy fighter pilots shot down nearly 300 enemy aircraft in one day. Flown by capable Allied airmen, among them Medal of Honor recipient Commander David S. McCampbell, the Navy's leading fighter ace with 34 kills, F6Fs shot down 5,216 Axis aircraft in 24 months and compiled an enviable kill ratio of 19:1. All told, the F6F produced more fighter aces, those with five or more aerial kills, than any other aircraft of World War II.

In the island-hopping campaigns across the Pacific, the Hellcat proved invaluable. Invasions were spearheaded by waves of F6Fs conducting fighter sweeps over enemy airfields, destroying planes that could threaten transports and landing craft. As troops went ashore, combat air patrols scanned the skies for aerial attackers while other Hellcats supported Marines and soldiers by hitting ground targets. Indeed, while it was in aerial combat that the F6F achieved lasting fame, it was a capable air-to-ground platform, with Hellcat pilots unleashing 60,000 rockets on land targets and enemy shipping during the war.

All told, Grumman Aircraft Engineering Corporation produced 12,275 Hellcats during World War II, at peak production rolling one off the assembly line every hour, around the clock. The Museum's F6F-5 Hellcat (Bureau Number 94203) entered service in July 1945 and has been in the collection since 1971. It is painted in the markings of Commander David S. McCampbell, the Navy's top ace of World War II.