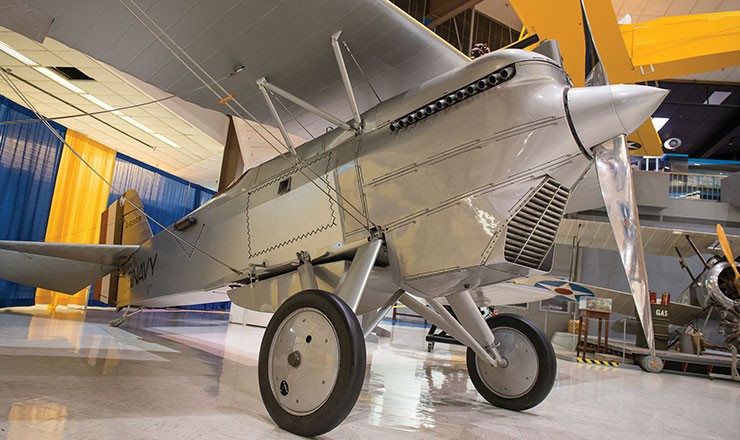 An exceptional Golden Age fighter and part of Curtiss' famous Hawk-series, the F6C Hawk served a critical role in developing the tactic of dive-bombing, being one of the earliest aircraft with an airframe strong enough to make the steep dives necessary for accurate strikes. During World War II, dive-bombing attacks such as those developed in the '20s and '30s were key to destroying the carrier force of the Imperial Japanese Navy.

The Curtiss Aeroplane and Motor Company's famous Hawk-series fighters were a mainstay in Army Air Corps and naval squadrons during the late-1920s and early-1930s. Four versions of the aircraft appeared during its production run, the configurations including the installation of tail hooks for carrier operations, floats for service as seaplanes, and conversion from the water cooled Curtiss D-12 engine to the more easily maintained Pratt & Whitney R-1340 radial engine. The F6C was the last Navy aircraft to employ liquid cooled engines.

The U.S. Navy procured the F6C-1, the type displayed in the Museum, beginning in March 1925, the same month that USS Langley (CV-1), the Navy's first aircraft carrier, first participated in the annual fleet exercises. Though the contract called for delivery of ten examples of the F6C-1, only seven were actually flown in that configuration, the others being modified with tailhooks and designated F6C-2s. However, though their ranks were small, the first Hawks participated in early experimentation with the tactic of dive-bombing, the sturdier metal construction on the leading edge of their wings allowing pilots to dive at angles as great as 70 degrees. On 13 December 1926, personnel of Fighting Squadron (VF) 2 employed F6C-1/2 and FB-5 airplanes in official exercises, scoring 19 hits out of 45 attempts on a 100 x 45 ft. target from an altitude of 1,000 ft. In addition to its performance in bombing, an F6C-1 also captured the 1926 Curtiss Marine Trophy Race, achieving a top speed of 130.94 mph.

The Museum's example of the F6C-1 Hawk was acquired from Roy Reagan of Chico, California, in 1986. It is restored in the markings of Bureau Number A-6969.