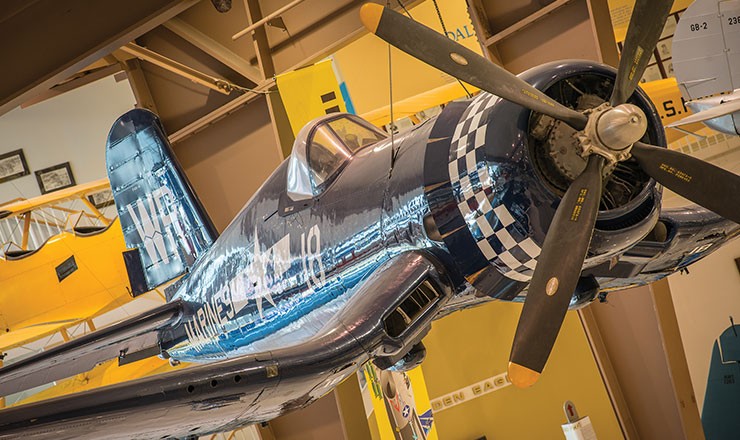 One of the most recognizable airplanes in history owing to its unique inverted gull wing design, the F4U remained in continual production from 1942 until 1952, with more than 12,500 examples of the aircraft delivered. One of the Navy and Marine Corps' finest fighters, Corsairs shot down 2,140 Japanese aircraft during World War II and in the Korean War a Marine pilot became the first to down a MiG-15 jet while flying a propeller-driven aircraft.

Vought-Sikorsky designed the F4U Corsair around the Pratt & Whitney R-2800 engine in a quest to build a fighter plane of unparalleled power and performance. The size of the engine necessitated a long nose and the aircraft featured inverted gull wings and tall landing gear in order to accommodate its oversized propeller. The result was an airplane that could eclipse 400 mph.

There were downsides to the design, however. The long nose necessitated a cockpit placement far back in the fuselage, which resulted in poor visibility during landing approaches. The plane also exhibited adverse stall characteristics at slow approach speeds, and a tendency to bounce on landing. These factors delayed introduction to carrier service, leaving it to Marine land-based squadrons to introduce the aircraft to combat in February 1943. Among the notable squadrons that flew the airplane from island airstrips were Fighting Squadron (VF) 17, nicknamed the Jolly Rogers, which shot down 152 Japanese aircraft, and Marine Fighting Squadron (VMF) 214, the famed Black Sheep commanded by Medal of Honor recipient Major Gregory "Pappy" Boyington. Eventually, the aircraft's problems aboard ship were solved, the solutions in some cases attributed to British Royal Navy pilots who flew export versions of the Corsair. This allowed for assignment of Navy and Marine Corps squadrons to aircraft carriers in the latter part of World War II.

In the hands of American Naval Aviators, Corsairs accounted for 2,140 Japanese aircraft shot down in World War II, and the sound the aircraft made when it was flying close air support missions during island campaigns inspired the Japanese to call the plane "Whistling Death." Still in service with both Navy and Marine squadrons during the Korean War, the aircraft proved itself still capable at close air support and ground attack. In addition, Marine Captain Jesse Folmar flew a most unusual mission in the skies over Korea, becoming the first piston-engine pilot to down a MiG-15 jet in air-to-air combat.

All told, three manufacturers (Vought, Brewster and Goodyear) delivered more than 12,500 F4Us in 13 production versions during the period 1942-1952, the longest production of any World War II fighter. The aircraft also flew in the military forces of six foreign nations, including France, which employed them in the campaigns in French Indochina [later Vietnam].

Among the last batch of production F4U-4 Corsairs delivered by Vought, the Museum's F4U-4 (Bureau Number 97349) was accepted by the Navy in 1946, serving in both Navy and Marine squadrons. Stricken from the Navy inventory in July 1956, it arrived at the Museum in 1985 and is displayed in the markings of the VMF-312 "Checkerboards."