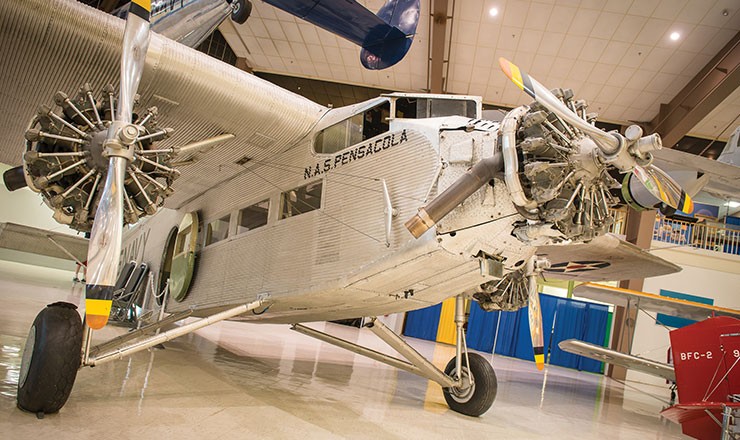 One of the most successful aircraft in history, the famed Ford Tri-Motor was used by more than 100 airlines worldwide, and many operated for more than a half century. Nine Tri-Motors, in five different models, were operated by the Navy and Marine Corps between 1927 and 1935. Designated RR-2 through 5 by the Navy, the first example was ordered in March 1927.

Derived from designs by William B. Stout, the famous Ford Tri-Motor came into being following Henry Ford's purchase of the Stout Aircraft Company. Designated the 4-AT, the design followed an earlier, unsuccessful aircraft, the 3-AT, which engineers Harold Hicks and Tom Towle reworked to produce the iconic aircraft. The resulting Tri-Motor went from the drawing boards to flight in just over four months, its first flight in June 1926.

The Navy became interested in the aircraft as a potential transport or cargo carrier, ordering a single example of the 4-AT-A in March 1927. Designated XJR-1 the aircraft was tested in 1928 and served until retired in 1930. Meanwhile, improvements were being made so rapidly that it was said that no two Tri-Motors were the same. Two 4-AT-Es were purchased in 1929. Designated JR-2s, they were assigned to the Marines and were powered by three 300 horsepower Wright J6-9 engines rather than the original 200 horsepower J-4 engines of the prototype, giving them improved performance. In 1930, three JR-3s, with enlarged wings and Pratt & Whitney Wasp engines were purchased, one for the Navy and the other two for the Marines. Shortly after, the aircraft were redesignated RR-2 and RR-3. A single Model 5-AT-C was later purchased and designated RR-4. Finally, two Model 4-AT-Ds were acquired, one each for the Navy and Marines, and designated RR-5s.

While very useful to the Navy and Marine Corps, the Tri-Motor is best known for its contribution to the growth of U.S. commercial aviation. It, and the Curtiss-Wright Condor, made commercial airlines practical and profitable a decade before the advent of Douglas' DC series or the Boeing 247.