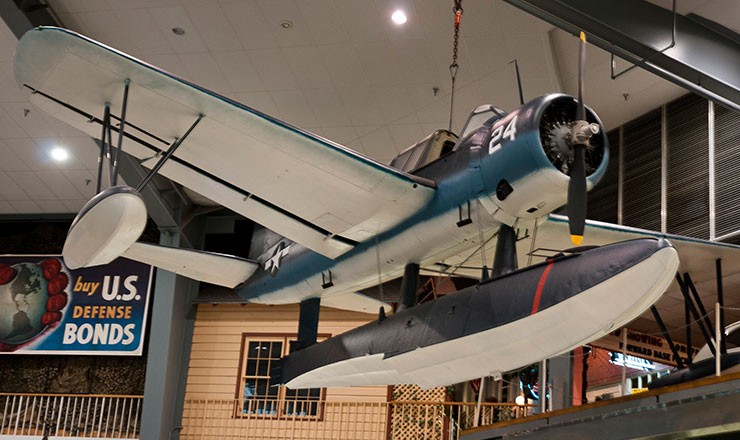 Flying from battleships, heavy cruisers and land bases during World War II, the Vought Sikorsky OS2U Kingfisher served throughout the Pacific in a variety of roles, from naval gunfire spotting, to observation, sub hunting and rescue. OS2Us were a familiar sight over Pensacola Bay during World War II, when they were catapulted from the shoreline at the naval air station during the training of observation and scouting pilots.

Vought Sikorsky's OS2U Kingfisher was derived from the company's considerable experience in building O2U and O3U observation aircraft for the Navy. In March 1937, the Navy ordered a prototype XOS2U-1, powered by a 450 horsepower Pratt & Whitney R-985-4 engine, its first flight taking place on 20 July 1937. The aircraft incorporated a large, single float and wing stabilizing pontoons. For operations ashore, the aircraft could be refitted with fixed main landing gear and tail wheel.

The production OS2U-1 was powered by the R-985-48 engine and had modified float attachments. The first 54 aircraft were delivered to the Navy in August 1940, with six of the aircraft joining the battle force at Pearl Harbor before the end of the year. The OS2U-2, delivered in 1941, involved few changes beyond the power plant, the R-985-50. Of the 158 examples delivered during 1940-1941, most were assigned to training duty at Naval Air Station (NAS) Pensacola, Florida, with 53 going to NAS Jacksonville, Florida for assignment to Inshore Patrol Squadrons. Nine of those squadrons received the OS2N-1, an OS2U-3 built by the Naval Aircraft Factory in Philadelphia. The OS2U-3 differed from previous models in that it had extra fuel tanks in the wings and armor protection for the pilot and observer. Starting in 1941, Vought delivered 1,006 OS2U-3 before production ended in 1942.

Launched by ship's catapult, the aircraft were recovered using a sea sled towed just below the surface and played out in waters smoothed by the ship's wake. The aircraft would land in the wake, taxi to the sled and engage it with a small hook on the bottom of the float before being craned aboard. In the Pacific, operating from battleships and cruisers, the Kingfisher performed scouting duties for the fleet, spotted inshore bombardment, and distinguished itself in the air-sea rescue role, in 1942 sighting and rescuing Eddie Rickenbacker and some other members of the crew of the B-17 in which he'd been flying when it went off course and was ditched at sea. In April 1944, Lieutenant Junior Grade John Burns landed in rough seas more than once to rescue 10 downed aviators at Truk. During one rescue, the men sitting on his wings or in the cockpit, made his aircraft too heavy to take off. Burns instead taxied through several miles of heavy sea to reach a submarine. For his bravery, he was awarded the Navy Cross, his action a testament to the tough little Kingfisher.

The Museum's example of the OS2U was a Lend-Lease aircraft that was operated by the navy of Uruguay until 1958. It was received by the Museum from that nation in 1971.