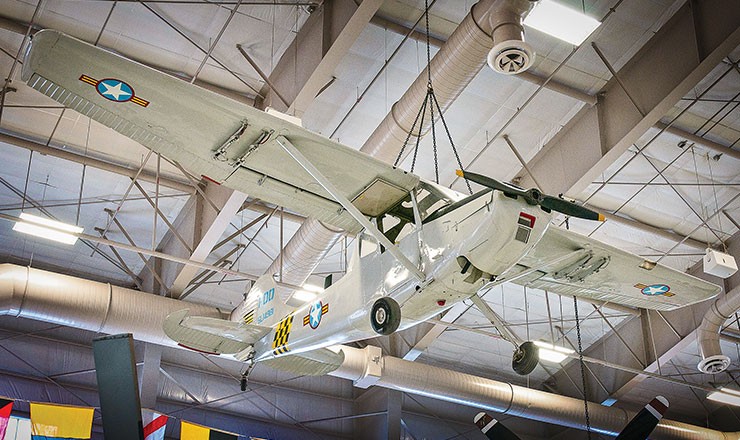 The Navy acquired 97 Cessna O-1C spotter planes for the Marine Corps in 1951, the aircraft serving throughout the conflicts in Korea and Vietnam. In April 1975, during the Saigon evacuation, RVNAF Major Bung-Ly loaded his family into an O-1, took off from Con Son Island and spotted USS Midway (CVA-41). After dropping a handwritten message detailing his situation, Midway cleared the flight deck and Bung-Ly landed aboard, his aircraft transferred to the Museum for display just months after the landing.

The Cessna OE-1/O-1 Bird Dog's combat service began in the Korean War, where it served in a scouting role for Army and Marine units, followed by active utilization in the Vietnam War as a forward air control aircraft. As late as 1968, pilots of O-1s patrolled over the Vietnam jungles in search of targets, marked them with signal rockets, and directed air strikes by tactical aircraft. The aircraft's slow speed proved valuable in observation missions along friendly convoy routes and while in contact with ground units to report locations of enemy ambushes. Drawbacks in the O-1, including lack of armor protection, no self-sealing fuel tanks, and reduced carrying capacity of rockets, resulted in their replacement by the Cessna O-2 and North American OV-10A, and eventual assignment to the South Vietnamese Air Force.

Of all of the aircraft on display in the museum, few have as inspiring a background as the O-1 Bird Dog. During the evacuation of Saigon in 1975, South Vietnamese Air Force Major Bung-Ly took off from Con Son Island in the Museum's aircraft with his wife and five children crammed into the small cabin. With enough gas to remain in the air for only one more hour, the pilot spotted the aircraft carrier Midway (CVA-41) and by means of a dropped note requested permission to land on board. The ship's commanding officer ordered the deck to be cleared and brought a Vietnamese interpreter to the island to communicate with the pilot by radio. Without the benefit of a tailhook or barrier, the pilot made a successful landing despite the fact that he had never seen an aircraft carrier before in person, let alone landed on one. Inspired by the event, the Midway crew adopted the pilot and his family, establishing a fund to help them settle in the United States.

Shortly after the landing, Midway put into Guam to offload aircraft that had landed on board during the evacuation. Captain Joe Cheshire, SC, was serving as commanding officer of the Naval Supply Depot on the island and, having previously served as the supply officer at Naval Air Station (NAS) Pensacola, he was familiar with the Naval Aviation Museum. Cheshire telephoned Museum director Captain Grover Walker, USN (Ret.), to gauge his interest in acquiring the aircraft. Using his shipment authority, Cheshire had the plane sent to the Museum and placed on display, where it has since been visited by Bung-Ly and his family.