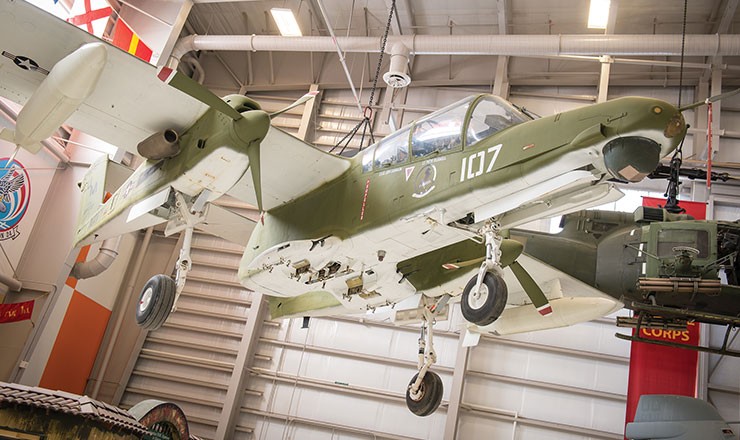 The OV-10 Bronco, a rugged, maneuverable, twin-turboprop, multi-mission aircraft, served with the U.S. Navy, Marine Corps and Air Force. One Navy squadron, the "Black Ponies" of Light Attack Squadron (VAL) 4, flew them with much success in the latter stages of the Vietnam War. The OV-10 remained operational in the Marine Corps until the 1990s, flying combat missions in Operation Desert Storm.

The OV-10 Bronco was a multi-purpose observation and light attack aircraft developed under an Air Force, Navy and Marine Corps tri-service program. The first production aircraft made its maiden flight in August 1967.

In Naval Aviation, the aircraft proved ideally suited for service in the jungle landscape of Vietnam, equipping Marine Observation Squadrons (VMO) and the Navy's first Light Attack Squadron (VAL). Nicknamed the "Black Ponies," VAL-4 formed in January 1969, and operated in Vietnam until April 1972, providing interdiction of enemy logistics and fire-support for Marines, SEALs and river boats. It succeeded in this role, although seven OV-10s were lost during the Vietnam War to various causes. Other than OV-10 fleet replacement training in cooperation with Antisubmarine Squadron (VS) 41 at NAS North Island, California, VAL-4 was the only squadron in the U.S. Navy to ever employ the OV-10 and the squadron was disestablished following its Vietnam service, with remaining OV-10s transferred to the Marine Corps. Broncos flew in Marine squadrons into the 1990s, including combat missions in Operation Desert Storm.