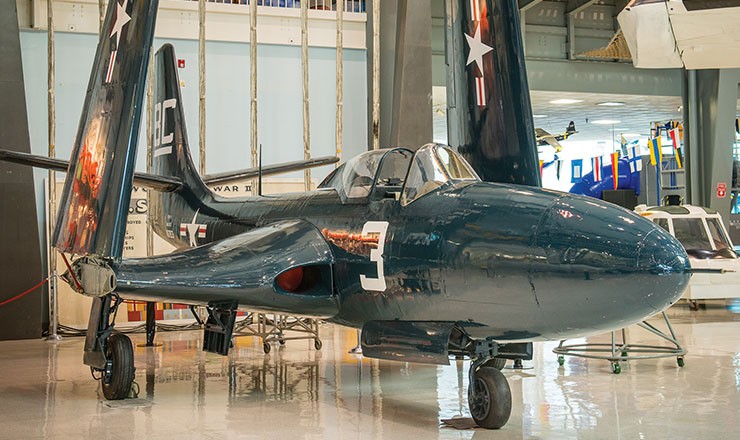 Initially designated the XFD-1, the prototype of the FH-1 was delivered for evaluation in 1946, thus becoming the Navy's first jet fighter. On 21 July 1946, the XFD-1 completed the first carrier qualification of a pure jet in U.S. Naval Aviation history on board the carrier Franklin D. Roosevelt (CVB-42). The first FH-1 Phantoms joined the fleet in 1947, with Marine Fighting Squadron (VMF) 122 flying them as part of an unofficial demonstration team called the "Marine Phantoms."

Though overshadowed by German development of jet aircraft during World War II, the U.S. Navy initiated work on its first jet fighter as early as 1942. Chosen to build the aircraft was McDonnell Aircraft Corporation, whose initial design featured three 300 lb. static thrust jet engines on each wing. After settling on a two-engine configuration for the new fighter, McDonnell began construction of two prototypes in January 1944, with the airplane's first flight occurring a year later.

Delivered to the Navy for evaluation under the designation XFD-1, the Phantom made history on 21 July 1946 when Lieutenant Commander Jim Davidson caught an arresting wire on board the aircraft carrier USS Franklin D. Roosevelt (CVB-42). This was the first landing of a pure jet fighter on an American aircraft carrier and represented the dawning of the jet age for U.S. Naval Aviation. Beginning in January 1947, the Navy took delivery of sixty production versions of the Phantom, carrying the designation FH-1. Equipping only one Navy squadron and two Marine squadrons (members of one forming an unofficial flight demonstration team called the "Marine Phantoms"), the aircraft's front line service career was short-lived. Transferred to Naval Air Reserve squadrons in 1950, the FH-1s were retired in 1953.

Accepted by the Navy in February 1948, the Museum's FH-1 Phantom (Bureau Number 111793) spent only a brief time in active service, the rapid development of jet aircraft technology outpacing it virtually from the moment it joined its first squadron. After flying for a brief time with Marine Fighter Squadron (VMF) 122, the first Marine jet squadron, at Marine Corps Air Station (MCAS) Cherry Point, North Carolina, it was stricken from the naval inventory in 1949. The Museum acquired the aircraft in 1983.