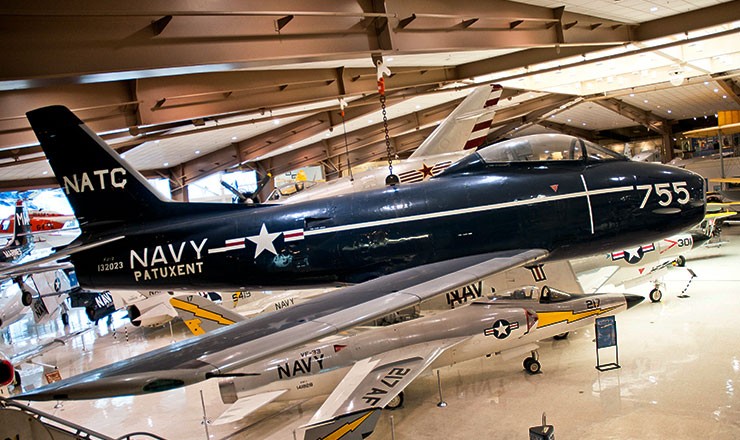 The FJ-2 resulted from an effort to navalize the Air Force's capable F-86 Sabre. Plagued with problems when operating aboard ship, the FJ-2 was flown exclusively by Marine Corps squadrons while in front line service. Despite limits in carrier operations, however, the FJ-2 was among the aircraft used to evaluate the first steam catapult installed on a U.S. Navy carrier.

The Korean War revealed to Naval Aviation leadership the shortcomings in the straight-wing jet fighters flown by Navy and Marine Corps squadrons when compared to the Soviet-built MiG-15s. With the U.S. Air Force's F-86 Sabre proving highly-effective in air-to-air combat over Korea, the Navy turned to the manufacturer of the aircraft, North American Aviation, Inc., for a swept-wing design for naval use.

Ironically, the straight-wing FJ-1 Fury built by the company for the Navy during the late 1940s had laid the groundwork for the development of the F-86. North American saw little need to reinvent a successful airplane and responded with the FJ-2, which was based on the F-86 Sabre and capable of 676 mph, almost 100 mph faster than the jet fighters then being flown by Naval Aviators in Korea. The aircraft was plagued with problems when operating aboard ship, prompting the Navy to assign them exclusively to Marine Corps squadrons in 1954, too late for operational service in the Korean War. Their service proved short-lived, as more advanced FJ-3/4 versions of the swept-wing Fury began replacing them beginning in 1957.

Accepted by the Navy on 16 April 1954, the Museum's example of the FJ-2 (Bureau Number 132023) served until July 1958. It arrived at the Museum in 1984 and is displayed in the markings of the Naval Air Test Center at Patuxent River, Maryland.