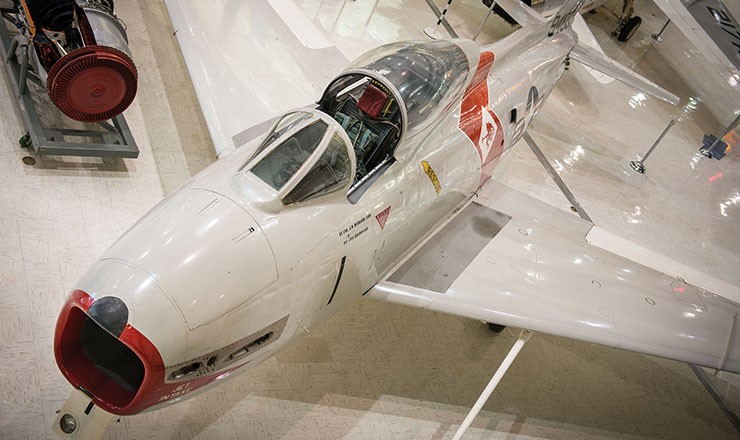 The FJ-4 was the final version of the swept wing Fury fighters delivered to the Navy. While the FJ-2 and -3 had been developed directly from the Air Force's famous F-86 Sabre, the FJ-4 was a complete redesign that solved many problems that plagued those earlier models in their transition to Navy ops. Further, of the 374 FJ-4s built, 222 were FJ-4B fighter-attack versions. FJ-4Bs were the first to deploy overseas with the Bullpup missile, the first mass produced guided air-to-ground weapon.

Concurrent with design and delivery of the FJ-2 and -3 versions of the aircraft, North American began work on the ultimate version of the FJ Fury series, one that would overcome previous problems with carrier operations, provide for increased range over its predecessors, and increase the aircraft's capabilities as a fighter-bomber. While the FJ-2/3 were variations of the Air Force F-86, the FJ-4 was essentially a new airplane. In order to accommodate an increased internal fuel capacity, engineers redesigned the fuselage to make it shorter and deeper. Particularly notable was the aircraft's wing design, which featured high lift flaps, a controllable drooping leading edge, and mid-span control surfaces. This translated into not only better performance when operating from a carrier, but also allowed for better performance at higher speeds. The first FJ-4 flew in October 1954, and production delivery began in February 1955. The FJ-4B appeared shortly after as an attack version of the aircraft with underwing pylons that could carry conventional or tactical nuclear weapons and Bullpup air-to-ground missiles.

All told, North American produced 374 FJ-4/4B aircraft (redesignated F-1E in 1962). Accepted by the Navy in November 1956, the Museum's example (Bureau Number 139486) is one of only two to exist anywhere in the world. It was retired from service in December 1964, with 2,351 flight hours and is painted in the markings of one of the squadrons in which it flew, the Marine Fighter Squadron (VMF) 232 "Red Devils."