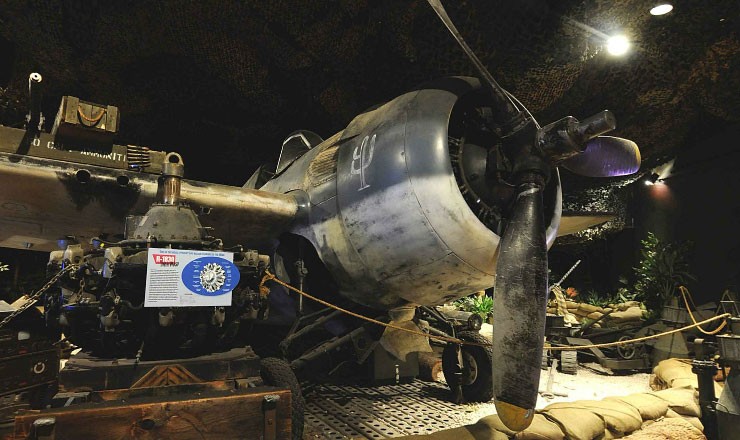 The FM-2 Wildcat was built by General Motors under license during the second half of the Pacific War. The Wildcat was the front line Navy/Marine Corps fighter at the outset of World War II and despite inferior climb and turn performance compared to the Japanese Zero, it had superior armament and its rugged design could take punishment in the form of enemy fire or operating from an austere jungle airstrip as depicted here.

Though Grumman-built F4F Wildcats disappeared from the scene in 1943, the Eastern Aircraft Division of General Motors continued production of the design under subcontract. Boasting a more powerful Wright R-1820-56 Cyclone engine and a taller tail, the General Motors built Wildcats carried the designation FM-1/2 and operated primarily from escort carriers. Though employed in the close air support role in the Pacific, FM Wildcats faced down enemy surface ships during the Battle of Leyte Gulf, their pilots heroically making repeated strafing runs against battleships and heavy cruisers in an attempt to draw fire away from American escort carriers during the landmark engagement.

Accepted by the Navy on 14 December 1943, the FM-2 Wildcat in the South Pacific Island Display (Bureau Number 16089) was transferred to the Pacific Theater in February 1944, eventually serving in an aircraft pool on Espiritu Santo before returning to San Diego in November 1944. Transferred to the Carrier Qualification Training Unit (CQTU) at Naval Air Station (NAS) Glenview, Illinois, the aircraft crashed in Lake Michigan on 28 December 1944, when Ensign Leonard L. Alick prematurely cut his engine during an attempted landing on the training carrier Sable (IX-81) and was forced to make a left bank to avoid hitting the ship. The plane spun into the water with the left wing down. Ensign Alick managed to escape from the aircraft before it sank in over 200 feet of water.

Recovered from Lake Michigan in 1993, the aircraft arrived at the Museum later in the year. In good condition when recovered, the aircraft underwent a limited restoration incorporating parts from another FM-2 Wildcat (Bureau Number 55404) and remanufactured parts (top gun accessory door, engine top accessory cowling, lower hinged door for wing fold, ammo box cover, and radio antenna mast). Found in the aircraft during this process was a yellow life raft dated November 1943 and a patch kit for the raft, one CO2 cylinder for use in the event of a cockpit fire, and one parachute.