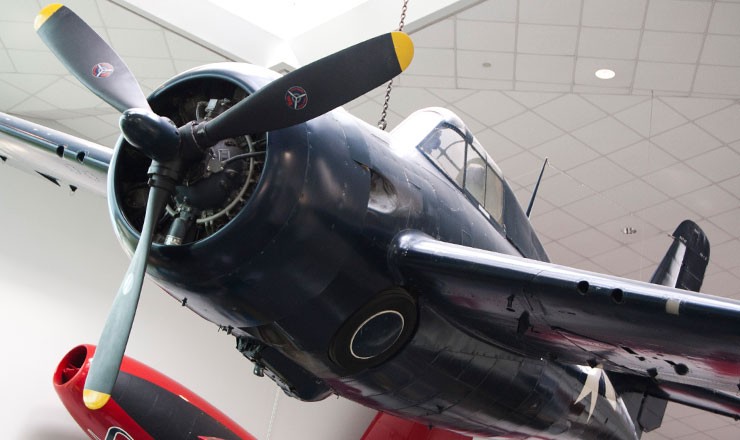 Built by the Eastern Aircraft Division of General Motors, the FM-2 Wildcat essentially is an improved version of the famous Grumman F4F-4. Recognized by its taller fin than the F4F, the FM-2 was also modified to include an improved power plant, increased ammunition capacity by reducing its armament from six .50-inch machine guns to four, and improved directional stability with a modified fin. This aircraft is an example of the 18,000 Grumman aircraft (TBM and FM-1/2) produced under license by Eastern Aircraft Division.

The famous Grumman F4F Wildcat was the first line fighter for the Navy and Marine Corps at the outbreak of World War II. The first operational models, the F4F-3 and 3A were followed quickly by the F4F-4, the latter's salient improvement the incorporation of folding wings which essentially permitted doubling the complement of fighters aboard existing aircraft carriers. In early 1942, however, the Navy pushed Grumman for development of a follow-on fighter, the F6F Hellcat. With Grumman lacking facilities to meet requirements for sufficient numbers of F4Fs while attempting to develop the newer F6F, the Navy turned to General Motors for help. The auto manufacturer quickly turned three idled auto plants in Tarrytown, New York, Trenton, New Jersey, and Baltimore, Maryland, into aircraft plants that would augment Grumman's production of both the TBF Avenger and the F4F Wildcat. The phenomenal transformation yielded a combined total by Grumman and Eastern Aircraft of more than 35,000 aircraft by war's end.

While the Wildcat was considered inferior in maneuverability to the vaunted Japanese A6M Zero, the more heavily armed, better protected F4F proved potent as U.S. Navy and Marine pilots learned to deal with the Zero's strong points and exploit it weaknesses. By war's end the F4F and FM kill ratio stood at a respectable 7 to 1. The designation FM-2 denotes an improved model of the F4F, incorporating an uprated R-1820 power plant (some models included water injection for increased power for takeoff from small deck escort carriers), an enlarged fin and rudder to counter the increased torque, and four gun armament with increased ammunition capacity. Most FM-2s were used in the Atlantic, operating from escort carriers involved in convoy protection and antisubmarine operations. The letter "M" in the aircraft's designation is the company code for Eastern Aircraft Division of General Motors.