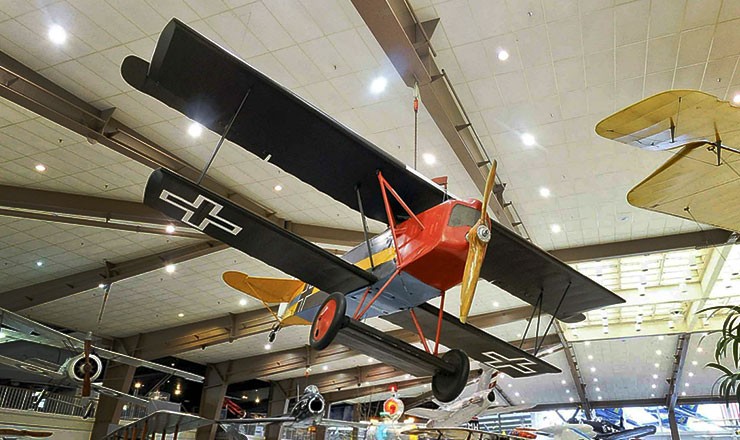 A fierce German fighter, the Fokker D.VII made its mark quickly after entering service in 1918, and was so feared that the Versailles Treaty mandated the surrender of all D.VIIs to the Allies. The Navy used a handful after the war as trainers. The Museum's example of the Fokker D.VII is a replica aircraft constructed using some original parts.

The Fokker D.VII appeared as the result of a design competition held in January 1918, and evolved into one of Germany's most capable fighters of World War I. Known for their maneuverability at high altitudes, the first D.VIIs entered combat in May 1918, and quickly made their mark in the skies over Western Europe by scoring 565 kills in August 1918 alone. So feared had the Fokker D.VII become by the end of hostilities that the Versailles Treaty mandated their surrender to the Allies. From the batch of 142 D.VIIs brought to the United States by the Army, the Navy acquired six for use as trainers with the Marine Corps at Quantico, Virginia, where they served until 1924. In addition, twelve versions of the aircraft, which incorporated extensive welded steel construction, were ordered from the Army in May 1920 for experimental and developmental work in metal construction.

The Museum's example of the Fokker D.VII is a replica aircraft constructed using some original parts by Dr. Stan Morel of Arlington, Texas, who served as an enlisted pilot in the Navy and retired as an aviation chief machinist's mate. At one time it was in flyable condition. Painted overall red when it arrived at the Museum in 1986, it underwent a complete rework by students at Pensacola Junior College.