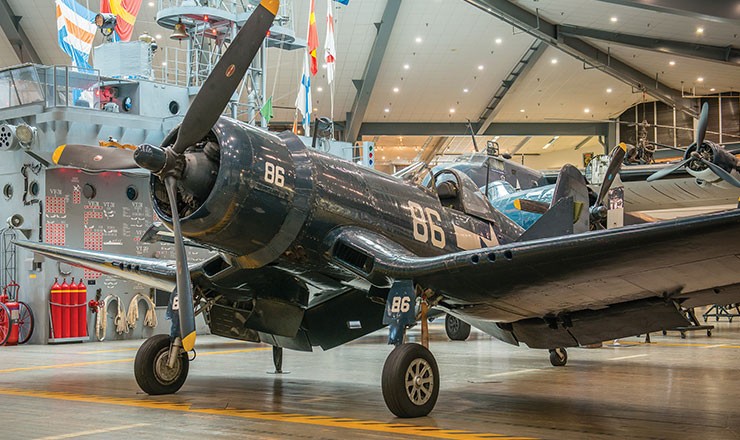 Dubbed "Whistling Death" by the Japanese, Vought's famous F4U Corsair served as one of the Navy and Marine Corps' premier fighters of World War II. In production longer than any other U.S. World War II-era fighter, Vought's design was subcontracted for production by other companies, among them Goodyear, whose Corsairs carried the designation FG. By the end of World War II, Goodyear-built Corsairs were flying in over 50 Navy and Marine Corps squadrons ashore and on board aircraft carriers.

The prototype, designated XF4U-1, first flew on 29 May 1940, and by year's end exceeded 404 mph, faster than any other U.S. fighter. In June 1941, the Navy ordered 584 F4U-1s, deliveries beginning in October 1942. Differing from the XF4U-1, the production model was modified by moving the cockpit three feet aft to make room for an additional fuel tank, changing the armament to six .50-caliber wing guns, and adding pilot armor and self-sealing fuel tanks.

Carrier trials found the F4U-1 wanting in several areas. Moving the cockpit aft caused visibility problems in carrier landings, soft oleo struts caused the aircraft to bounce, and the Corsair had a tendency to stall during the slow carrier approach. Thus, the land-based Marine Fighting Squadron (VMF) 124 became recipients of F4U-1s in February 1943, and by August, seven more Marine units were flying Corsairs in the Solomon Islands. In September, the Navy's Fighting Squadron (VF) 17 became operational in New Georgia. To speed production, Goodyear Aircraft and Brewster produced similar versions of the F4U-1, designated as the FG-1 and F3A, respectively. Various modifications appeared. Some FG-1As had non-folding wings; the F4U-1C incorporated four 20mm cannon in the wings, and still others were adapted to the fighter-bomber role, incorporating a centerline drop tank and provision for carrying bombs on inboard wing stations, along with rockets under the wings.

Looking to solve the carrier landing problem, the aircraft were modified with a raised pilot's seat, a semi-bubble canopy, a stall strip on the right wing, stiffened oleo struts, and a raised the tail post for taxi visibility. In April 1944, the Navy approved the Corsair for carrier operations. The airplane went on to distinguish itself in the air, with an 11 to 1 kill ratio during World War II, and as a fighter-bomber in Korea. When production ended in December 1952, 12,521 Corsairs in 18 different models had been built, among which were 1,074 FG-1s. One of them was the Museum's aircraft (Bureau Number 92246), which entered service in June 1945, and flew primarily with the Naval Air Reserve until stricken from the Navy's inventory in 1976.