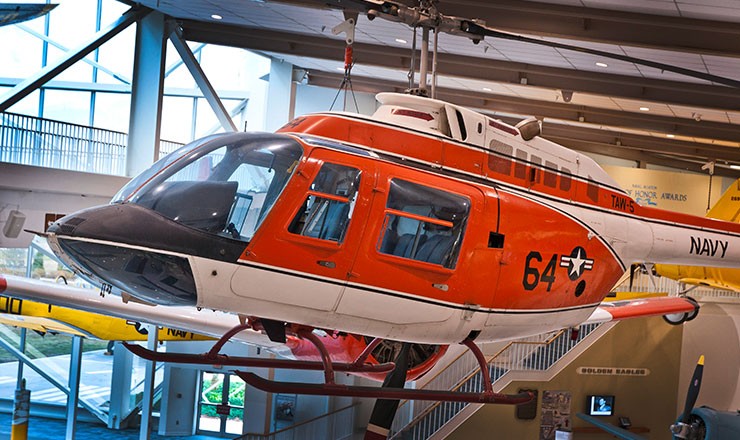 Bell's versatile Jet Ranger 206, a staple in civilian aviation circles, drew the interest of the Navy during the Vietnam War. Procured in 1968 and designated the TH-57 Sea Ranger, the helicopter remains the platform in which all Navy, Marine Corps and Coast Guard helicopter pilots are trained.

In 1968 the Navy took delivery of the TH-57 Sea Ranger, a derivative of the commercial Bell Jet Ranger 206 and kin to the OH-58 Kiowa. Although primarily used for helicopter flight training, these aircraft were also used for photo, chase and utility missions.

Following certification by the Federal Aviation Administration in 1966, Bell Helicopter Company's sleek, streamlined Jet Ranger became an instant hit in the civilian market with about 300 built by mid-1968. As was often the case with aircraft designs, civil success drew military interest. The Army soon named the aircraft winner of a reopened design competition for a light observation helicopter and ordered 2,200 production versions, designating them OH-58 Kiowas. Deployed to Vietnam as early as 1969, the OH-58 served as a scout helicopter, a role that advanced versions continue performing today.

While the Army sent the Jet Ranger into hostile skies, the Navy ordered its first aircraft, designated TH-57As, as trainers to supplement the famed UH-1 Huey then in use. By the early-1980s, with the introduction of the improved TH-57B and TH-57C versions of the Sea Ranger, the latter featuring a full array of instruments, the type had become Naval Aviation's primary training helicopter.

It has proven to be an exceptional trainer, stable but very sensitive to control inputs, especially rudder. Student Naval Aviators find it challenging at first to smoothly hover the aircraft, practicing over large white box outlines painted on the surfaces of outlying fields. The typical tendency is to overcontrol initially, but then, sooner or later, it happens, and students find themselves hovering effortlessly, demonstrating very fine control of the aircraft, finally relaxed and able to multitask. The TH-57 well prepares student Naval Aviators for larger and heavier fleet aircraft.