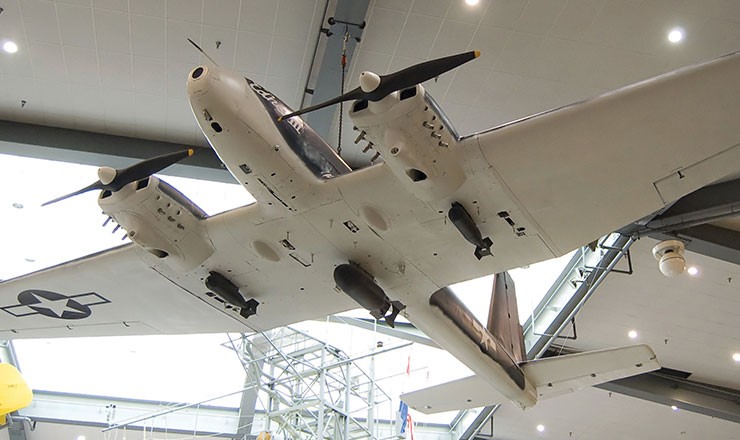 The world's first legitimate cruise missile, the TDR-1 was built around RCA's early television. RCA's chief scientist, Dr. Vladimir Zworykin, designed the system to be used for final guidance. Interstate Aircraft designed and manufactured the aircraft, providing both radio control and facility for a pilot so that the aircraft could be ferried to a destination. Carrying a 1,000 lb. bomb or a torpedo, and controlled from a TBM-1C Avenger control aircraft, the TDR saw action In Pacific in September 1944. Two months later it was withdrawn from combat.

In 1936, Commander Delmar Fahrney initiated research relating to naval uses for pilotless drones as anti-aircraft artillery targets. By 1941, the advent of the radar altimeter and television provided the means for an effective system. David Sarnoff of RCA offered his services to the War Department; RCA's newly developed television would be put to use in the war. RCA Chief Scientist, Dr. Vladimir Zworykin, developed a camera and receiver system that would comprise the heart of a guidance system along with gyro stabilization and a radar altimeter.

Higher priorities for strategic materials gave low priority to the project, and it was decided that the airframe be made of pressed wood over a tubular steel frame. Interstate Aircraft of El Segundo, California, was given the contract for 200 of the aircraft. The tubular steel frame was sub-contracted to Schwinn Bicycle Company, and other components were provided by the Wurlitzer Musical Instrument Company. Power plants consisted of two non-military Lycoming flat-head 6s of 230 horsepower each. While designed as a drone, controls were provided for a pilot, the cockpit canopy was removable and a fairing would be installed for drone operation. In that way, the aircraft could be ferried to a destination manually, while remote operation would be limited to tactical employment.

The drone, designated TDR-1, was ready by late 1942, but did not see action until September 1944, when a unit designated STAG-1 deployed with 50 TDR-1s to the Russell Islands in the Southwest Pacific for evaluation and use against Japanese-held islands. During a two-month period, 50 drones were launched with 31 hits recorded on anti-aircraft sites, bridges, airfields and grounded ships. Guided by a modified TBM-1C Avenger torpedo bomber, the drone would be launched by a ground control crew, and then turned over to the TBM pilot already airborne over the field. Joined on the drone, the TBM pilot would pass control to the controller in the rear cockpit, who would then guide the drone to the target, his 5-inch TV screen receiving visual signals from the TDR's nose-mounted camera.

By October 1944, the use of the TDRs ended, the concept of precision-guided munitions deemed of lesser priority in the Pacific due to U.S. air superiority. The concept also was tried in Europe, using war-weary, explosive-laden B-17 and B-24 bombers in Projects Aphrodite and Anvil, but with little result.