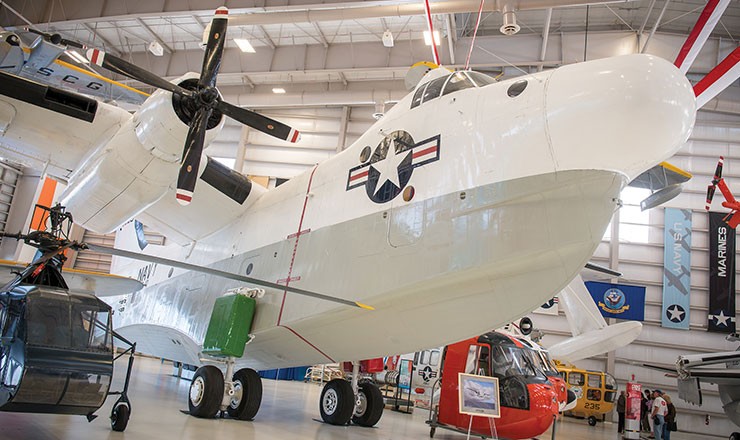 The Navy acquired 259 Martin P5M Marlins commencing in 1952, the aircraft destined to be the last flying boat operated by the Navy. The P5M was designed for antisubmarine patrol and surface search, equipped with sensors and weapons to detect and attack enemy contacts. Redesignated SP-5 after 1962, the Mariner served in the Vietnam War, flying coastal surveillance as part of Operation Market Time. The Museum's aircraft made the last operational flight by a U.S. Navy flying boat.

When first delivered in 1952, the P5M Marlin became a key component in the Navy's antisubmarine warfare mission. The aircraft featured APS-80 search radar in a prominent, bulbous nose, as well as weapons-bays in the long engine nacelles that protruded from its wings. In addition, modified versions carried an array of antisubmarine gear, including magnetic anomaly detection equipment and the Julie and Jezebel echo-sounding and sonobuoy detection systems. All told, the Navy accepted 259 production versions of the Marlin, including the P5M-2 that featured a "T-tail." In 1962, P5M-1/2 aircraft were redesignated P-5A/P-5B, while antisubmarine warfare equipped P5M-1S/2S aircraft became SP-5A/SP-5Bs. Though primarily employed in antisubmarine warfare during their service, Marlins flew missions of a different sort in Vietnam in support of Operation Market Time, the surveillance of the coast of South Vietnam to prevent the flow of supplies into the country.

One of the first batch of P5M-2s delivered, the Museum's aircraft was accepted by the Navy in May 1956 and joined its first squadron, Air Development Squadron (VX) 1, the following month. During its ensuing 11 year career with the fleet, this aircraft served in a number of patrol squadrons, finishing its active career with VP-40, which in 1967 became the last squadron in the U.S. Navy to make an operational deployment with flying boats.

Despite its routine service career, the Museum's aircraft was destined to be special. While most SP-5Bs of VP-40 were scrapped following the squadron's final deployment, some survived and, as destiny would have it, one of them was the aircraft now on display. As the end of 1967 approached and the phasing out of the Marlins continued, the Navy decided to have one final curtain call for Navy flying boat operations. Because at the time they were the only big boat crew in the Navy to possess "Alpha" status (signifying their complete qualification in all phases of antisubmarine warfare), the crew of the Museum's aircraft (Bureau Number 135553) was chosen to fly the ceremonial last flight. Thus, on 6 November 1967, in a final tribute to flying boat operations in the U.S. Navy, this airplane made one last pass over Naval Air Station (NAS) North Island and splashed down in the waters of San Diego Bay.