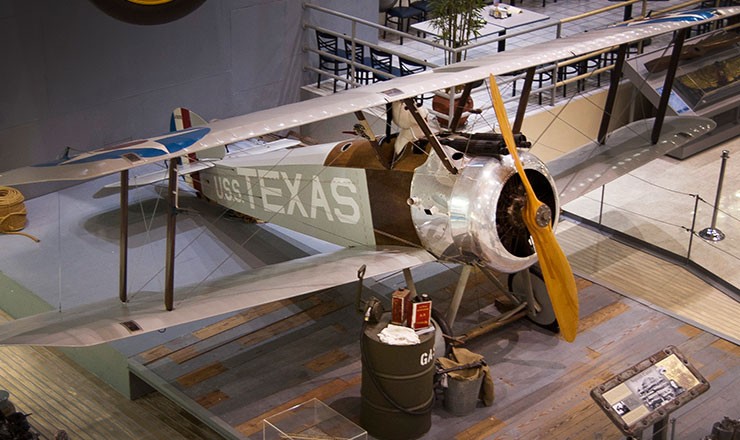 On display behind NC-4 near the Cubi Bar Café, the Sopwith Camel was a British single-seat biplane fighter introduced on the Western Front in 1917. Manufactured by Sopwith Aviation Company, it had a short-coupled fuselage; heavy, powerful rotary engine; and concentrated fire from twin synchronized machine guns. Though difficult to handle, to an experienced pilot it provided unmatched maneuverability. A superlative fighter, the Camel was credited with shooting down 1,294 enemy aircraft, more than any other Allied fighter of the war, and was flown by Lieutenant Junior Grade David S. Ingalls, the Navy's sole ace of World War I.

One of the most successful British fighters of World War I, its nickname partially derived from the distinctive hump forward of the cockpit that encased part of its Vickers machine guns, the Sopwith Camel entered service in 1917. Characterized as a "squat contrivance" by one pilot when he first saw one, the new fighter quickly earned a contrasting reputation among pilots. The plane's amazing maneuverability provided a great advantage in aerial combat, its attributes the result of the fact that the engine, armament, fuel, and cockpit were crammed into the forward part of the aircraft. However, this arrangement made it tricky to fly, and the aircraft was susceptible to spins. They equipped numerous squadrons on the Western Front, including some American units, and among the U.S. Naval Aviators who flew the fighter in combat was Lieutenant Junior Grade David S. Ingalls. He became the Navy's only fighter ace of the Great War, scoring six kills, some of the 1,294 enemy aircraft downed by Camels during 1917 and 1918.

Among the users of the Camel was the Royal Naval Air Service, which received the first delivery in May 1917. At sea, they were involved in experiments launching from lighters towed by destroyers. Ironically, after the Armistice, the U.S. Navy obtained six Camels for experiments at Guantananmo Bay, Cuba, operating planes aboard ship using wooden platforms built over the forward turret guns of battleships. Battleship launched aircraft were normally flown ashore, but also were equipped with inflatable air bags underneath the wings to keep the aircraft afloat in the event of a water landing.