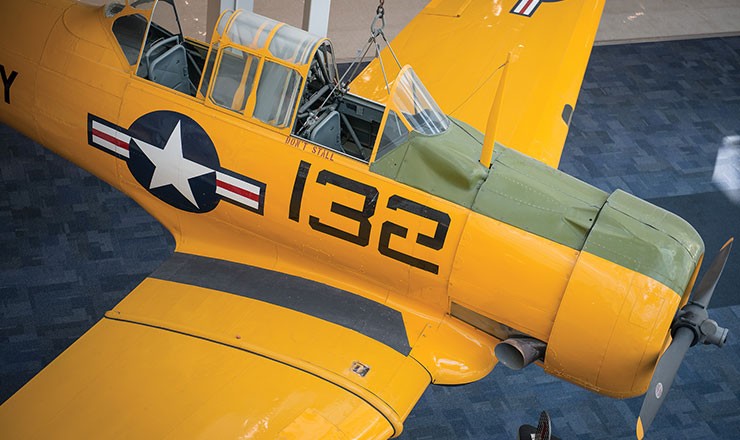 An exceptionally well-conceived and well-built Navy trainer, the SNJ entered service before World War II and served into the 1950s, ubiquitous in the training programs of the Navy and Air Force. Two generations of Naval Aviators trained in the SNJ, and a number of aviators made their first carrier landings in the aircraft.

The SNJ Texan, with over 17,000 examples delivered to the U.S. military and numerous foreign nations, was the most widely used trainer ever. The earliest version was an open cockpit monoplane with fixed landing gear and a fabric covered fuselage, but with the 1938 introduction of the SNJ-1, the Texan had evolved into an all-metal aircraft with retractable landing gear.

During the World War II era, the SNJ served the purpose of transitioning pilots from biplanes to monoplanes, and they were also employed as gunnery and instrument trainers. In addition, many a carrier pilot of the 1950s logged his first traps aboard a training carrier in a Texan. An SNJ played an important role in the development of the modern aircraft carrier when it was utilized in 1953 to test day/night touch-and-go and arrested landings and takeoffs in winds of varying force and direction on the Navy's first angled deck aircraft carrier, Antietam (CVA-36). Though designed as trainers, Air Force versions of the aircraft flew combat missions as forward air controllers, and export Texans fired weapons in small-scale wars in Asia and Africa. In addition, Hollywood movies, most notably the Pearl Harbor epic Tora Tora Tora, employed SNJs modified in appearance to represent Japanese Zeros.

Delivered in 1943, the SNJ-5C Texan on display (Bureau Number 51849) spent most of its service life at Naval Air Station (NAS) Pensacola and surrounding airfields, but also flew as a utility aircraft aboard the aircraft carrier Kearsarge (CVS-33). The aircraft served for a time in the Argentine Navy before it arrived at the Museum in 1984. The aircraft is displayed in the markings of a squadron at Naval Auxiliary Air Station (NAAS) Barin Field near Foley, Alabama.