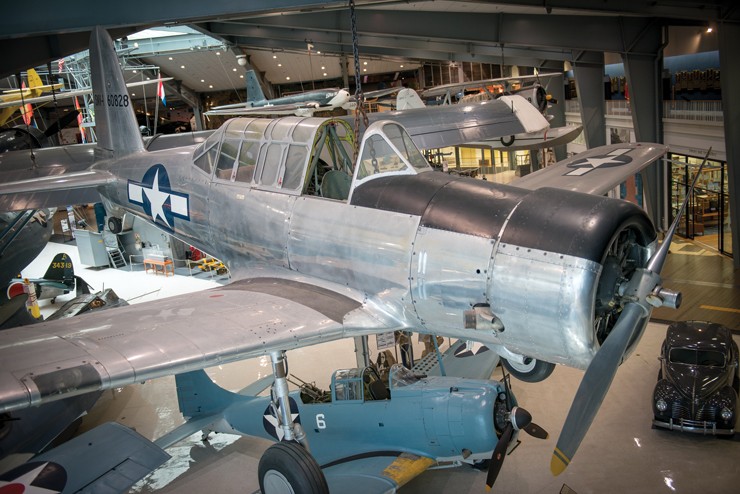 The airplane was built in 1941 and flew with the Army Air Forces as a BT-13A.  It was acquired by the National Naval Aviation Museum from a civilian owner in 1982 and is displayed in the markings of an SNV-1.

Jerry Vultee worked for some of the biggest names in the early aircraft industry, among them Lockheed and Douglas, before ultimately lending his name to his own firm, the Vultee Aircraft Division of the Aviation Manufacturing Corporation in 1937.  Though the talented engineer was killed along with his wife in a tragic plane crash in 1938, the Vultee name endured with the incorporation of Vultee Aircraft in 1939.  The war that began in Europe on September 1st of that year and ultimately involved the United States, brought tremendous expansion of the company.  During 1940-1941, Vultee’s manufacturing floor space increased by 450% and its workforce grew from 1,900 to 9,700 people.  A significant portion of those resources were devoted to building basic training aircraft for the U.S. military, most notably the BT-13, which when ordered represented the largest aircraft order ever placed by the Army Air Forces.  All told, over 11,500 of these airplanes rolled off the Vultee assembly line, including 2,000 examples for the Navy, which designated them SNVs.

Only three bolts held the tail to the fuselage, which restricted the SNV’s use in aerobatics.

Squadron delivery of the 2,000 examples of the SNV (1,250 SNV-1s and 650 SNV-2s) began with delivery to Naval Air Station (NAS) Corpus Christi, Texas, in 1941.  The last deliveries to the Navy were made in 1944, with SNVs operating at training centers around the country, including NAS Pensacola, NAS Jacksonville, NAS Miami, and surrounding auxiliary air stations.  Additionally, the Coast Guard procured two examples to serve as instrument trainers at Coast Guard Air Station (CGAS) Biloxi, Mississippi.

As one World War II flight student characterized the SNV, “[they were] in-between, low-winged with cockpits that closed, but with fixed landing gear and a shuddering, whining engine- transitional trainers, and like everything else in the world that can be called transitional, profoundly unsatisfactory.”

The SNV did serve the valuable purpose of introducing students to a heavier, more high-performance airplane, in particular giving them a taste of formation flying that was more demanding than in primary training biplanes.  In addition, SNVs were uses extensively as instrument trainers.  In this role the cockpits featured hoods that blocked the student’s reference to the outside world.  This forced him to learn to ignore what his senses were telling him and fly the airplane based on what the needles and dials were telling him about the attitude of the airplane in flight.

The last SNV-2s appeared in the Navy inventory in 1946, but they had been withdrawn from Navy service in great numbers before that time.

In their life after World War II, a number of surplus aircraft were purchased by Twentieth Century Fox in the 1960s. The aircraft were converted to resemble both Japanese D3A1, Type 99 carrier attack aircraft (Val), and the B5N1, Type 97 (Kate) carrier torpedo bombers for the movie Tora Tora Tora.