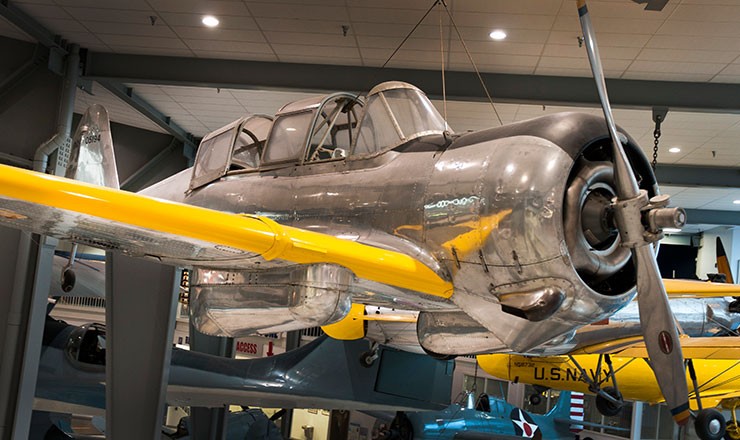 Reflecting the shift in aviation design in the years leading up to World War II, the SNC Falcon was an all-metal low-wing monoplane derived from a light fighter design and widely used as a training aircraft. The Museum's example was accepted by the Navy in 1942, and served as a trainer and utility aircraft until 1944.

The Curtiss-Wright Corporation's CW-22 was a 1940s general-purpose advanced training monoplane aircraft. It was conceptually similar to the SNJ, which preceded it into the Navy training inventory, but had a less powerful engine, among other differences.

The CW-22 prototype first flew in 1940, with Curtiss presenting it to customers as a civilian sport or training monoplane or as a combat trainer, reconnaissance and general purpose aircraft for military use. The CW-22 and -22B were sold to the Netherlands, Turkey, and some Latin American countries. Following the outbreak of World War II, the Japanese captured several of the Dutch aircraft and put them in service.

An unarmed advanced training version, the CW-22N, was demonstrated to the Navy. To help to meet the war-driven need for aviator training, and transition from biplanes to monoplane aircraft, the Navy ordered 150 CWE-22Ns in 1940. Further orders brought the total to 305 aircraft, which were designated SNC-1 Falcons.

The Museum's example (Bureau Number 05194) was accepted by the Navy in 1942. It served as a trainer and utility aircraft until 1944, when it was stricken from the Navy inventory. It arrived at the Museum in 1984.