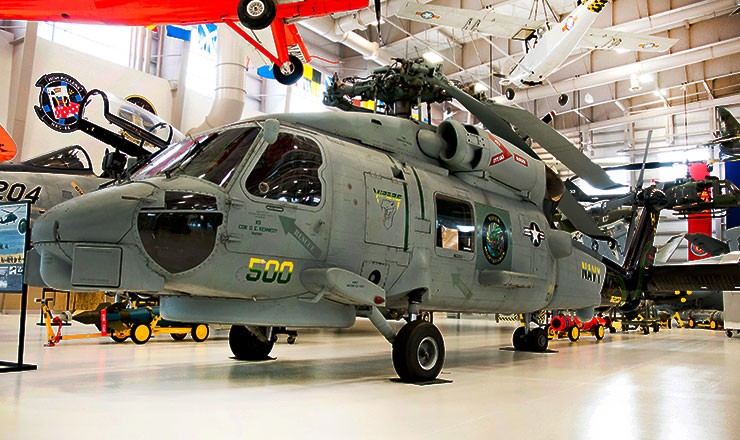 The Seahawk is a modern day workhorse for the U.S. Navy. While the SH-60B like that on display specializes in anti-surface and anti-submarine warfare, a number of Seahawk variants exist, each fulfilling a unique role. Packed with an array of advanced sensors and avionics, and capable of carrying a variety of ordnance, the SH-60B has been a deadly part of the Navy's arsenal since the 1970s, and will remain so until replaced with the enhanced MH-60R.

During the 1970s, the U.S. Navy began looking for a new helicopter to replace the Kaman SH-2 Seasprite. The Seasprite was used by the Navy as its platform for the Light Airborne Multi-Purpose System (LAMPS) Mark I avionics suite for maritime warfare. Advances in sensor and avionics technology lead to the LAMPS Mk II suite, but the SH-2 was not large enough to carry the required equipment.

The SH-60B airframe was manufactured by Sikorsky and integrated with mission equipment by Lockheed-Martin. The first production version SH-60B made its first flight on 11 February 1983. The SH-60B entered operational service in 1984 with first operational deployment in 1985. Since its acquisition, the U.S. Navy has expanded use of the H-60 airframe under the model designations SH-60B, SH-60F, HH-60H, MH-60S, and MH-60R. Each specific model has a unique naval mission. Able to deploy aboard any air-capable frigate, destroyer, cruiser, fast combat support ship, amphibious assault ship, or aircraft carrier, the Seahawk can perform missions in anti-submarine warfare (ASW), anti-surface warfare (ASUW), naval special warfare (NSW) insertion, search and rescue (SAR), combat search and rescue (CSAR), vertical replenishment (VERTREP), and medical evacuation (MEDEVAC). All Navy H-60s carry a rescue hoist for SAR/CSAR missions.

The SH-60B is now being replaced by the Navy's newest helicopter, the MH-60R. This aircraft was originally referred to as "LAMPS Mark III Block II Upgrade" when it began development in 1993. The MH-60R is designed to combine the features of the SH-60B and SH-60F. Its sensors include the ASE package, MTS-FLIR, an advanced airborne fleet data link, and a more advanced airborne active sonar. It does not carry the MAD suite. Offensive capabilities are improved by the addition of new Mk 54 air-launched torpedoes and Hellfire missiles. All Helicopter Anti-Submarine (HS) and Helicopter Anti-Submarine Light (HSL) squadrons that receive the Romeo are redesignated Helicopter Maritime Strike (HSM) squadrons.