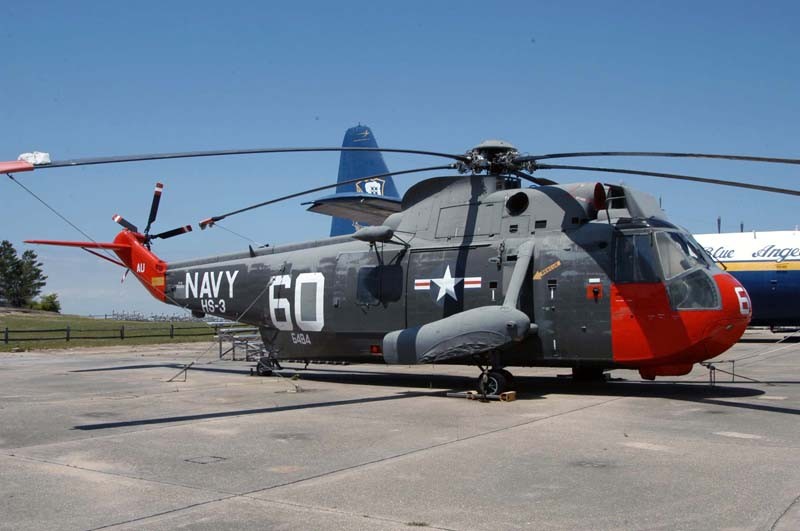 In an effort to replace antisubmarine hunter/killer teams of two helicopters with one platform capable of performing both missions, the Navy contracted for the Sikorsky H-3 Sea King. Delivered to the fleet beginning in 1961, the Sea King carried an array of sounding equipment and an ordnance payload of 840 lb. A true amphibian with a water tight hull and stabilizing floats for retractable wheels, the helicopter also featured an auto-stabilization system that, coupled with automatic hovering equipment and a Doppler/radar altimeter, provided the H-3 with the required all-weather capability.

A twin engine design, the Sea King demonstrated its capability in February 1962, by becoming the first helicopter to exceed a speed of 200 M.P.H. in an officially sanctioned trial, bettering the existing world record for distances between 15 and 25 kilometers. Three years later, an SH-3A launched from the flight deck of the carrier Hornet (CVS 12) moored at Naval Air Station (NAS) North Island, California, and 15 hours later touched down on the flight deck of the carrier Franklin D. Roosevelt (CVA 42) tied up at Naval Station (NS) Mayport, Florida, completing the first helicopter transcontinental flight without refueling. By that time, SH-3As equipped 11 helicopter antisubmarine squadrons.

Though hunting enemy submarines was the prime reason for its procurement, the Sea King's outstanding performance capabilities prompted its adaptation to other missions, including combat search and rescue (which necessitated the installation of defensive armament and a turret-mounted 7.62 mm mini-gun). They proved highly successful, with Sea Kings of Helicopter Combat Support Squadron (HC) 1 pulling 36 people to safety, including 15 pilots, during operations off Vietnam in 1972. H-3s also performed mine-countermeasures mine countermeasures and in a highly-visible role, recovered astronauts and their space capsules during the Gemini and Apollo programs. Among the advanced versions of the Sea King was the SH-3D, which incorporated the more powerful 1,400 horsepower T58-GE-10 engine and better provisions for in-flight refueling.

The Museum's SH-3D (Bureau Number 156484) entered service in 1968. Though displayed in the gray and orange scheme representative of the earliest Sea Kings delivered to the Navy, the museum's helicopter wore white during most of its career, which included stints in HS-5 in the carrier Independence (CVA 62) during the early 1970s and later with HS-11 and HS-1. It made its last flights in Helicopter Combat Support Squadron (HC) 16 before being acquired by the museum in 1992.