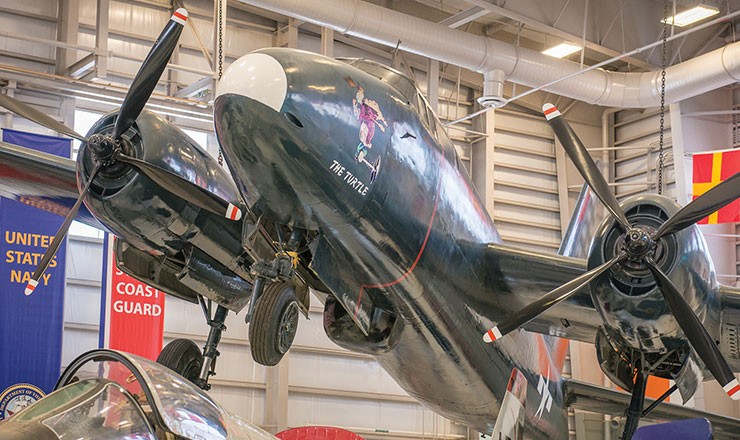 The P2V Neptune was a long range maritime patrol aircraft developed during World War II and operated by Navy patrol squadrons across the world throughout the Cold War and Vietnam. Its first milestone came as a modified P2V-1 dubbed the "Truculent Turtle," now on display in the Museum, made a record-breaking endurance flight in September 1946. The Turtle flew nonstop without refueling from Perth, Australia, to Columbus, Ohio, a distance of 11,235 miles, in 55 hours and 17 minutes, a record it held until 1962.

In 1946 Lockheed Aircraft Corporation delivered the first of a fourteen-plane batch of P2V-1 Neptunes (Bureau Number 89082), an aircraft specially modified for maximum endurance. Removing all its armament and replacing the nose turret of standard P2V-1s with a more streamlined metal nose, the aircraft also boasted increased fuel capacity with the installation of additional tanks in the bomb bay and aft fuselage and provision for carrying wing tanks.

What prompted these modifications was a July 1946 memorandum from the Chief of Naval Operations, Fleet Admiral Chester W. Nimitz, to the Secretary of the Navy proposing a long-range, non-stop flight between Perth, Australia, and Washington, D.C., for "the purpose of investigating means of extension of present patrol aircraft ranges, physiological limitations on patrol plane crew endurance, and long-range navigation by pressure pattern methods."

By September the aircraft, nicknamed the "Truculent Turtle," was positioned for the flight, its crew consisting of four seasoned wartime patrol plane pilots and a baby kangaroo. Loaded with as much fuel as the aircraft could possibly carry, the Turtle lifted 268 percent of its own weight with the assistance of JATO (Jet Assisted Take Off) bottles upon take off on 29 September 1946. Encountering winds and heavy weather over the Pacific Ocean and rain, sleet, and snow over the Rocky Mountains, the Truculent Turtle consumed more fuel than anticipated and had to make a landing at Naval Air Station (NAS) Columbus, Ohio. Averaging over 200 mph during the flight, the aircraft traveled 11,235 miles in a time of 55 hours and 17 minutes without refueling. It took a jet-powered B-52H Stratofortress to break this record, which stood until 1962. The distance record for a reciprocating engine aircraft stood 40 years until broken by Burt Rutan's Voyager, which completed a nine-day, non-stop circumnavigation of the globe in 1986.

Eventually placed in storage and later displayed at NAS Norfolk, Virginia, the historic aircraft (Bureau Number 89082) was placed under the auspices of the Smithsonian National Air and Space Museum and eventually shipped to Pensacola by barge in 1977. Originally on loan to the National Naval Aviation Museum, the airplane was formally transferred in 1990.