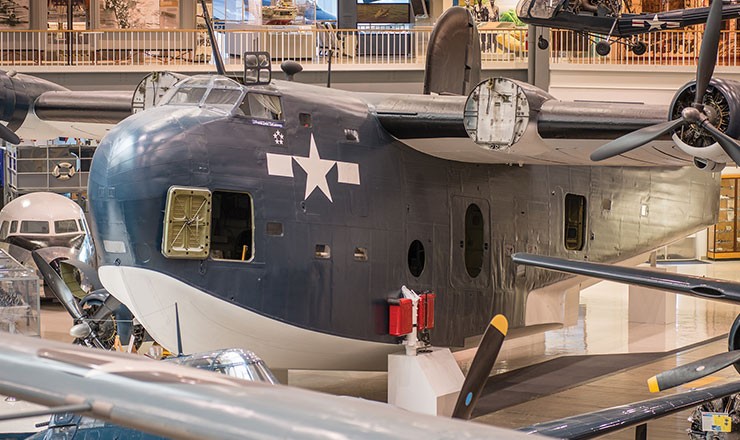 Soon after the first flight of the XP3Y (later PBY) Catalina, the Navy began seeking a larger, better performing flying boat. Prototypes were ordered from both Consolidated and Sikorsky, in 1935 and 1936 respectively. The XPB2Y-1 first flew in December 1937, but production was delayed until 1939, with first deliveries reaching Patrol Squadron (VP) 13 in December 1940. The PB2Y on display, one of 210 built and last known surviving Coronado, later served as an executive transport, taking the staff of Fleet Admiral Chester W. Nimitz to Tokyo for Japan's surrender ceremonies on 2 September 1945.

Following the first flight of the XP3Y-1 (later PBY), the Navy sought even larger, better performing aircraft for use as patrol bombers. Both Consolidated Aircraft, in June 1935, and Sikorsky, in July 1936, submitted designs for prototypes. Consolidated's Model 29 design incorporated many of the features of the Catalina, including retractable wing tip floats, but in all other aspects it was an entirely new aircraft. Its high-mounted wing and large hull accommodated a crew of ten. First flown in December 1937, and designated the XPB2Y-1, the aircraft was powered by four 1,050 horsepower Pratt & Whitney R-1830-72 engines, and was armed with two .50-caliber guns (in the nose and tail) and three .30-caliber guns (two in the in the waist and one in the tunnel).

First equipped with a tall single fin and rudder, in final form the PB2Y featured a twin tail and a redesigned hull. With priority going to PBY procurement, production of the PB2Y was delayed until March 1939, when Consolidated was given a contract for six production PB2Y-2s. Powered by R-1830-78 engines with two-stage superchargers, the PB2Y-2's armament was increased to six .50-caliber machine guns. Despite the increased weight, PB2Y-2s achieved a speed of 255 mph at 19,000 ft.

First deliveries were made to Patrol Squadron (VP) 13 in December 1940. A further contract provided for 210 PB2Y-3s, with R-1830-88 engines, self-sealing fuel tanks and eight .50-caliber guns. Named "Coronado," the big boat was later equipped with radar. Compared to other Navy flying boats, the PB2Y front-line service was limited, though Coronados participated in bombing missions against Japanese-held Wake Atoll and aerial mining operations in the air campaign against the Japanese naval base at Truk Atoll. Modified versions of the airplane included 10 PB2Y-3Bs supplied to Britain and used as transatlantic freighters, and 31 PB2Y-3s converted to PB2Y-3Rs with faired-over turrets for use as transports. Other PB2Y-3s were upgraded to PB2Y-5s and -5Rs, fitted with R-1830 non-supercharged engines, and increased fuel capacity. Similarly modified PB2Y-5Hs were configured for medical evacuation with provision for 25 stretchers.