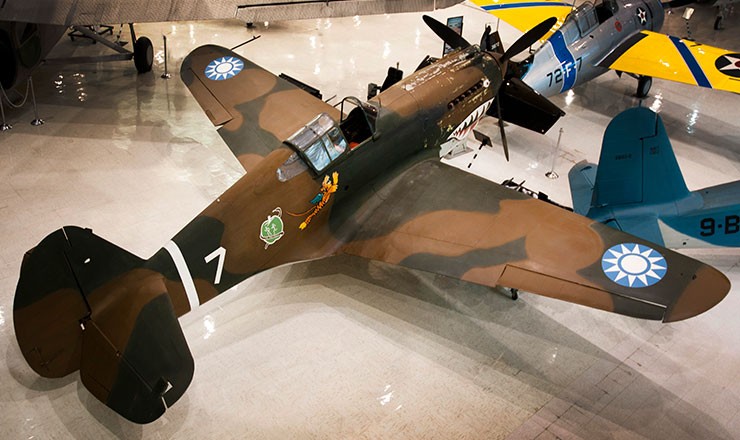 Never included in Naval Aviation's inventory, the P-40B Tomahawk is displayed to honor those Naval Aviators who joined Colonel Claire Chennault's American Volunteer Group (AVG), better known as the Flying Tigers. Entering combat in December 1941, the AVG quickly gained fame flying against overwhelming odds. As America entered the war, and U.S. units moved into China, the AVG was summarily disbanded on 4 July 1942. In its short life, however, the AVG shot down 299 enemy aircraft and destroyed another 153 on the ground.

The P-40B Tomahawk evolved from the Curtiss Model 75 Hawk, a radial-engined fighter introduced in the mid-1930s. First flown in October 1938, the XP-40 was the fastest U.S. Army fighter at the time, and deliveries of the P-40 began in June 1940. The P-40B first flew in November 1941, and was quickly sent to the Royal Air Force (RAF) under Lend-Lease. The original models lacked self-sealing fuel tanks and carried two .50-caliber cowl-mounted guns and two .30-caliber guns in the wings. The P-40B was improved with self-sealing tanks, pilot armor and two extra wing guns, though the RAF versions of the Tomahawk were armed with six .303-caliber machine guns. B and C-model Tomahawks served with the RAF in North Africa in 1941-1942, where it was quickly discovered that the aircraft was inferior to the German BF-109, except at low altitude. The British turned down further deliveries, preferring to wait for the more powerful P-40D and E "Kittyhawk."

With the signing of the Lend-Lease Act, the Chinese Commissioner of Aviation, T.V. Soong, approached the U.S. to procure aircraft for China's air force. A number of P-40Bs were available, and were sold to a Chinese company. CAMCO, as it was called, shipped crated P-40Bs to Rangoon, Burma, where they were assembled. In a parallel move, CAMCO hired retired Navy and Army officers to travel to U.S. naval air stations and Army fields to recruit pilots, promising better pay than the U.S. military offered, along with getting into the war that America, at the time, resisted entering. In 1937, Claire Chennault, a retired U.S. Army captain, had been hired by the Nationalist Government to train Chinese pilots, then flying both Russian and Italian aircraft far inferior to the Japanese. Forming the AVG, Chennault had new P-40 aircraft and a host of American recruits.

Though initially planned for three groups, the AVG actually fielded only one before America placed a freeze on the release of active duty personnel. Among the Naval Aviators who resigned their commissions to fly with the AVG were David Lee "Tex" Hill, Chuck Older, Dick Rossi, and Gregory Boyington, to name a few. In fact, the majority of the pilots in the AVG were Naval Aviators. "Tex" Hill became one of the top aces in the AVG, Older was a double ace with both the AVG and Army Air Forces 23d Pursuit Group, and Boyington returned to the Marines to become a four-time ace and command the famous "Black Sheep" of Marine Fighting Squadron (VMF) 214. Another former Naval Aviator who served in the AVG, James H. Howard, eventually became an Army Air Forces pilot and received the Medal of Honor for actions over Europe in 1944. From 20 December 1941 to 4 July 1942, the AVG downed 299 enemy aircraft, and destroyed another 153 on the ground.