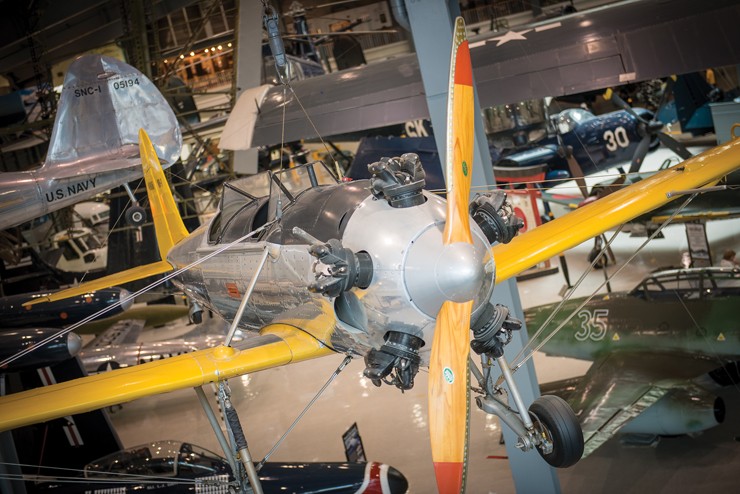 With the onset of World War II, the Navy launched a wartime expansion that would produce nearly 65,000 pilots by the end of 1945. Ryan's NR-1 (ST-3) Recruit was one aircraft selected to help meet these demands. The original ST evolved from 1933 to 1943, with combat versions flying with the air forces of the Netherlands and China during World War II and trainers equipping both the Navy and the Army Air Forces.

The airplane was built in 1941 and likely flew with the Army Air Forces as a PT-22 primary trainer.  Flown by civilian owners in the postwar years, it was acquired by the National Naval Aviation Museum in 1982 and is painted in the markings of a Navy NR-1 Recruit primary trainer.

In 1922, former Army Air Corps pilot T. Claude Ryan founded a flight school and aerial sightseeing operation in San Diego, California. Partnering with Benjamin Franklin Mahoney, he subsequently founded Ryan Airlines, which offered passenger service between Los Angeles and San Diego.  Though he sold his interest in the company in 1926, he stayed on as a manager and pursued aircraft design.  The latter proved fortuitous when in 1927, a group of investors approached him to design an airplane capable of transatlantic flight.  The result was the famous Spirit of St. Louis flown by Charles Lindbergh.  Subsequently, Ryan was involved in a number of aviation companies, eventually forming the Ryan Aeronautical Company, with the Ryan School of Aeronautics as a subsidiary.  Not surprisingly given the focus on flight instruction through this school, the Ryan Aeronautical Company specialized in trainers, introducing low-wing monoplane trainer design called designated the ST, versions of which attracted the interest of the Army Air Corps and Navy.

In an era in which primary trainers were almost exclusively biplane designs, the airplane was a low-wing monoplane.  In addition, it featured a metal fuselage that contrasted with the fabric covered fuselages of other Navy primary trainers (N3N and N2S).

The main fuel tank in the NR-1 held less fuel than that of a modern Sports Utility Vehicle (21 gallons), but burned about 13.6 gallons an hour when the aircraft was at full throttle.

Between 1940 and 1941, the number of aviators trained by the Navy increased from 708 to 3112, launching a wartime expansion that would produce nearly 65,000 pilots by the end of 1945. The Ryan ST-3 was one of the aircraft chosen by the Navy to meet the training demands of this great number of fliers. The first of 100 airplanes ordered by the Navy and designated NR-1s entered service in 1941, the total production run of the aircraft for the U.S. military totaling nearly 1,200 airplanes, most of them being PT-22s operated by the Army Air Forces.  In naval service, NR-1s operated at Naval Air Stations (NAS) Jacksonville, Florida, and Memphis, Tennessee, as well as at Naval Auxiliary Air Station (NAAS) Cecil Field, Florida, until 1944.