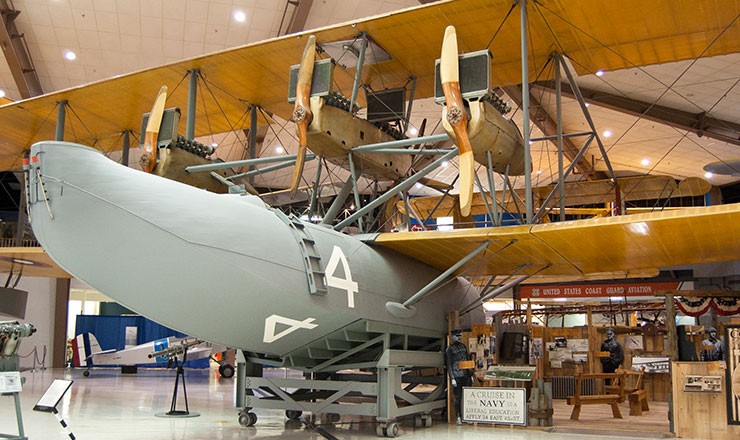 The NC flying boats were designed as aircraft that could fly across the Atlantic to the coastlines of Europe and be ready to patrol for German U-boats upon arrival. Too late for World War I, the NCs still took up the challenge of traversing the Atlantic by air, and in May 1919, the NC-4 made the first successful transatlantic flight, a milestone in aviation history that brought great acclaim to Naval Aviation.

Originally built as a long-range antisubmarine warfare platform, the NC flying boats were delivered too late for World War I combat and appeared to be aircraft without a mission. Yet, even before the guns fell silent on the Western Front, a bold proposal written by Commander John H. Towers caught the imagination of the Navy Department. When peace returned, it called for the U.S. Navy to regain American prestige in aviation by achieving a feat that all who flew aspired to flying across the Atlantic.

On 3 May 1919, crews of the NC-1, NC-3 and NC-4 gathered at Naval Air Station (NAS) Rockaway, Long Island, for the transatlantic attempt. In the ensuing days a series of mishaps cast a pall over the endeavor, including a fire that damaged the NC-1, and one of the NC-4's crewmen accidentally sticking his hand into one of the aircraft's whirring propellers during an engine test.

By 8 May 1919, with a four leaf clover presented to each crew member for luck, the three flying boats launched on the first leg of the their flight from Rockaway to Halifax, Nova Scotia. Only two completed the nine-hour trip, the NC-4 being forced down off Massachusetts with engine trouble and the media giving her the nickname the "Lame Duck." Once reunited at Trepassey, Newfoundland, the flying boats launched into the early evening sky on 16 May 1919, bound for the Azores Islands, the longest and most demanding leg of the transatlantic flight, covering some 1,200 nautical miles. Increasing clouds and rain caused the aircraft to separate, with NC-1 and NC-3 making forced landings. Only NC-4 successfully reached the Azores, the crew of NC-1 rescued by a Greek freighter and the crew of NC-3 actually sailing their battered craft 205 miles to the Azores.

Thus, the "Lame Duck" became the sole survivor of Seaplane Division One, and on 27 May 1919, the keel of the NC-4 flying boat sliced through the waters of the harbor in Lisbon, Portugal. The aircraft's commander, Lieutenant Commander Albert C. Read, later wrote to his wife that the successful flight represented "a continuous run of unadulterated luck," but indeed the skill and bravery of the crew combined with fortuity in making the NC-4 and her crew the first to fly the Atlantic.