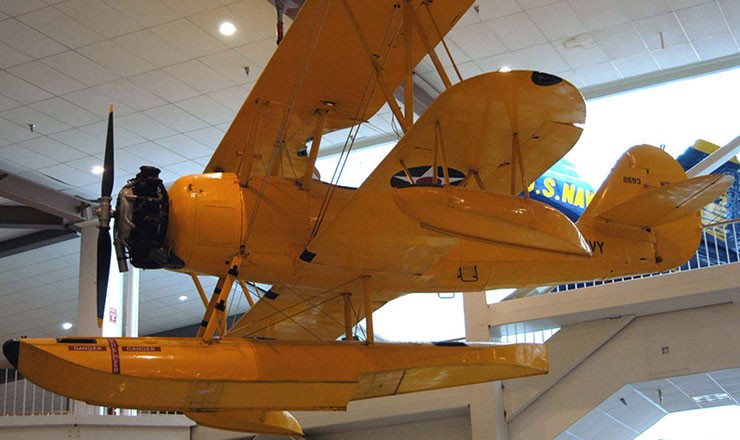 Called "Yellow Peril" because of its color scheme and principal use by inexperienced flight students, the Naval Aircraft Factory's N3N primary trainer was extremely rugged and easy to maintain. The N3N operated in both wheeled and float configurations, introducing hundreds of students to Naval Aviation, even after World War II.

In 1934 the Naval Aircraft Factory set to work designing its own primary trainer and the project was given top priority. The result was a unique design featuring an all-metal construction using surplus aluminum from the ZN airship project. The prototype also featured a single integral top wing, a fuel tank forward of the front cockpit, and removable panels that allowed the entire port side of the aircraft to be opened for maintenance.

By 1935 the prototype had made its maiden flight, marking the commencement of a long career for the aircraft known officially as the N3N. All who flew the aircraft knew it as the "Yellow Peril," a nickname prompted by its paint scheme and the fact that it was flown predominantly by inexperienced student pilots. In reality, the N3N was reliable and embodied the "ruggedness" that had been demanded of it, both characteristics that earned the respect of the thousands of Naval Aviators who received their first taste of flying in the N3N. Where it became "perilous" was in taxiing. Poor visibility from the cockpit combined with inadequate brakes and an ineffective rudder led to more than a few "ground loops."

Acquired in much smaller numbers than the N2S, the N3Ns saw service with the Navy as a primary trainer from the late thirties to the mid-forties as both wheeled and floatplanes. Float configured N3Ns were later used for midshipmen indoctrination flights at the U.S. Naval Academy until their retirement in 1961, the last biplane ever used in military service. Like their counterpart, the Stearman N2S, some N3Ns remain in the air today as crop dusters or private recreational aircraft.

Accepted by the Navy in September 1941, the Museum's floatplane version of the N3N-3 Yellow Peril (Bureau Number 3046) flew throughout World War II. It continued in operation at Naval Air Station (NAS) Pensacola and training Naval Academy midshipman at Annapolis during 1947-1948. It was acquired by the Museum in 1978.