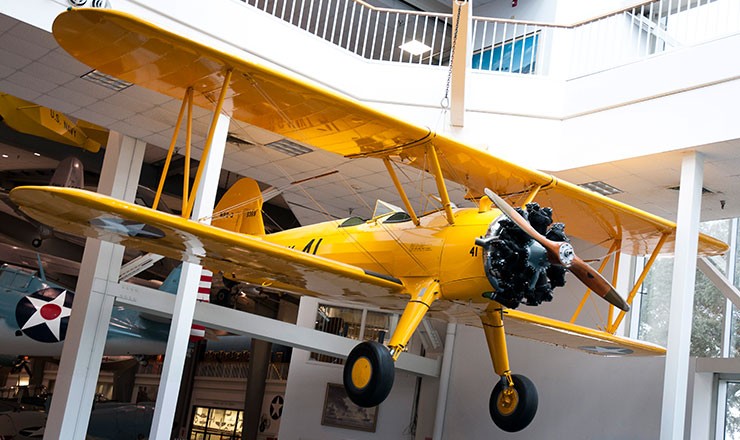 One of the most-produced biplanes in history, the N2S served as the nation's foremost primary trainer during World War II. Though nicknamed the Kaydet, the airplane was more commonly called the Stearman after its manufacturer, and was much beloved by military and, later, civilian aviators. Former President George H.W. Bush made two flights in this particular aircraft during his World War II flight training at Naval Air Station (NAS) Minneapolis, Minnesota.

The N2S was perhaps the most-produced biplane ever with 10,346 examples rolling off the production line between 1934 and 1945. Though the company christened the trainer with the name "Kaydet," those who flew and maintained it universally called it the Stearman.

Initially designed as an Army Air Corps trainer, the Stearman served extensively in the Navy. In the late-1930s the sea service accepted the first of 4,318 of them. By World War II, both Army and Navy operated standardized versions of the aircraft with interchangeable parts, unique in an era when joint operation were far from standard.

When former Naval Aviator George H.W. Bush became Commander in Chief, the records of surviving N2Ss were canvassed for any that he flew. Logbooks of five N2S-3s indicated that they had been flown by Bush during his training at Naval Air Station (NAS) Minneapolis, Minnesota. The Museum's example (Bureau Number 05369), once owned by World War II/Korean War pilot and retired airline captain Jack Parker, logged two flights with Aviation Cadet George H.W. Bush at the controls at NAS Minneapolis during January 1943. The airplane finished the war with 2,860 flight hours. Acquired by the Museum in 1992, it is painted in standard wartime Navy markings.