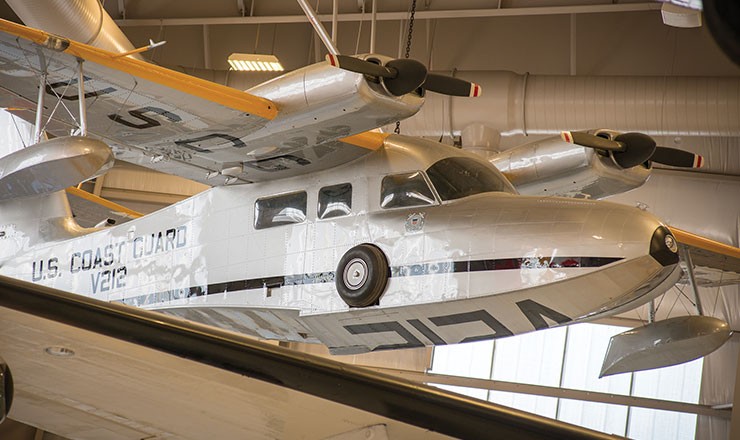 The J4F Widgeon was built as a smaller, less expensive alternative to the G-21 Goose for use in the civilian market, one customer being Pan American Airways, which operated the type as seaplane trainers. In Navy and Coast Guard operations, the airplane flew utility, search and rescue, and antisubmarine missions. The Museum's aircraft was procured by the Coast Guard and flew antisubmarine patrols over the Gulf of Mexico during World War II, where it attacked and damaged the German submarine U-171 on 1 August 1942.

In July 1941, Grumman delivered the first of 25 modified commercial G-44s to the U.S. Coast Guard. Designated J4F-1s, these aircraft carried Coast Guard serial numbers V197-V221, the last of the Coast Guard J4F-1s entering service in June 1942. These J4F-1s differed from their civilian counterparts in the addition of a hatch on top of the fuselage for loading stretchers, and a wing rack installed beneath the starboard wing that could hold a depth charge, bomb, raft, or search and rescue gear.

By mid-1942 the German submarine war extended into the Gulf Sea Frontier. In response, the Navy increased the number of aircraft available along the Gulf Coast, including Coast Guard number V212, the aircraft currently on display in the Museum. On 1 August 1942, Aviation Chief Machinist's Mate Henry C. White and Radioman First Class George H. Boggs, Jr., took off in V212 for an antisubmarine patrol south of Houma, Louisiana. White spotted a surfaced U-boat and attacked. An expanding oil slick lent credence to the belief that the U-boat had been sunk or severely damaged. It was first thought that White had sunk U-166. Postwar analysis and the finding of wrecks on the sea floor during exploration by an oil company revealed that this was not the case. V212 only damaged U-171, which was able to continue operations. The Museum's aircraft flew with the Coast Guard until 1948 and was later flown as a commercial airliner in Alaska.