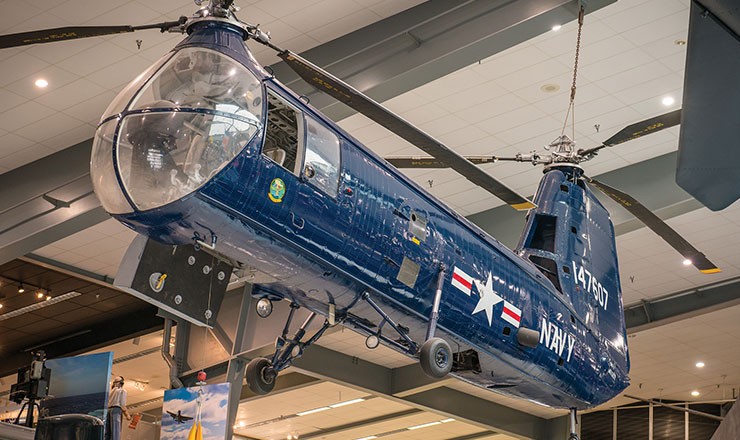 Appropriately nicknamed "Retriever," the Piasecki HUP operated on board every deployed aircraft carrier at the height of its career, flying as a plane guard ready to pull downed aircrews from the water in the event of a mishap. Further, in 1955 a HUP became the first aircraft to land on a nuclear-powered vessel, its wheels touching down on the submarine Nautilus (SSN-571).

Among aircraft designer Frank Piasecki's early interests was a tandem-rotor helicopter, the first of which was the HRP, the shape of its canvas-covered fuselage inspiring the nickname "Flying Banana." Other than the dual rotor configuration, however, the HRP's successor, delivered in 1949, bore little physical resemblance to the HRP. Designated HUP, the helicopter's primary missions were search and rescue and plane guard duty on board aircraft carriers, its capabilities enhanced by installation of a rescue hoist lowered through a floor hatch that was wide enough to allow for the passage of a loaded stretcher. A later version (HUP-2S) was equipped with dipping sonar and flown in the antisubmarine warfare role, and the HUP-3 held the distinction of being the first production helicopter equipped with an automatic pilot system, though its unreliability precluded it from seeing much utilization.

At the height of their career in the Navy, HUPs were carried aboard all aircraft carriers, their compact fuselages allowing for easy stowage on board. One Retriever also made history on board another vessel when, on 4 August 1955, its wheels touched down on the deck of the submarine Nautilus (SSN-571) signifying the first ever landing of an aircraft on a nuclear-powered vessel. A total of 339 production models of the Retriever served in the U.S. Navy and U.S. Army, with others procured by the Royal Canadian Navy and the French Navy. The HUP's tandem overlapping rotor configuration was used in future helicopter designs, notably the CH-46 Sea Knight.

Accepted by the Navy in April 1958 after having been operated by the U.S. Army, the Museum's HUP-3/UH-25C served in Helicopter Utility Squadron (HU) 2 at Naval Air Station (NAS) Lakehurst, New Jersey, operating in squadron detachments on board the carriers Forrestal(CVA-59), Lake Champlain (CVS-39), Saratoga (CVA-60), and Randolph (CVS-15) during the period 1961-1962. Stricken from the naval inventory in March 1963, it was acquired by the Museum in 1988.