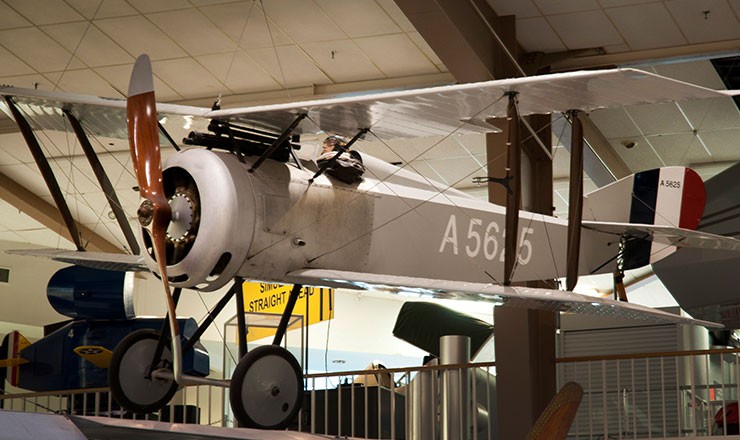 Hanging overhead is the Hanriot HD-1. A capable French fighter, the HD-1 was overshadowed by its contemporary, the SPAD VII, and saw use mostly with Belgian and Italian pilots. After the war, the U.S. Navy acquired several for shipboard evaluation, performing launch experiments from wooden decks erected atop the gun turrets of battleships. Though this method was ultimately abandoned, it was nonetheless part of a movement to make Naval Aviation a force firmly integrated with the surface fleet.

The first aircraft produced by Hanriot-Dupont, a company formed at the beginning of World War I, the HD-1 appeared around the same time as the highly capable SPAD VII. Thus, though over 1,000 HD-1s were built, they did not see widespread service with the French, instead flying in the hands of Belgian and Italian pilots. One of the former, Willy Coppen, achieved a string of victories in the nimble fighter, while Italian HD-1s shot down eleven German fighters without losing one of their own during the Battle of Istrana on 26 December 1917.

While the HD-1 achieved combat success over European battlefields, U.S. Navy officers at sea witnessed firsthand the tremendous strides made by the British Royal Navy in operating aircraft from ships during World War I. This prompted these air-minded officers to evaluate shipboard operations in the months following the end of the Great War. Realizing that wheeled-aircraft provided more capability in speed and maneuverability, the Navy procured a handful of foreign-built aircraft for use in the experiments, flying them from wooden decks erected atop the gun turrets of battleships. Among them were the Hanriot fighters.

Out of a batch of 26 French Hanriot HD-2 seaplanes, the Navy converted ten to landplane configuration and designated them HD-1s. Some outfitted the Ship Plane Unit conducting experimental work at Langley Field, Virginia, and others operated from the battleship Mississippi(BB-41) under the command of Captain William A. Moffett, who later was promoted to flag rank and became the first Chief of the Bureau of Aeronautics. Given their operations over water, the HD-1s were equipped with flotation bags beneath the wings that could be inflated in the event of a water landing as well as a hydrovane forward of the main landing gear to prevent the aircraft from nosing over when it hit the water. Hanriots remained in the Navy's aircraft inventory into the early-1920s.