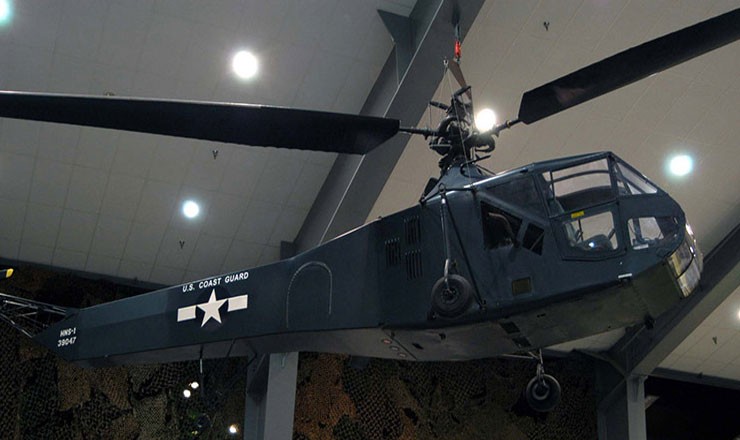 The HNS Hoverfly, Naval Aviation's first helicopter, was used extensively by Coast Guard Aviators as they spearheaded adoption of the new aircraft type. In January 1944, the HNS-1 executed the first helicopter mission of mercy, flying through unfavorable weather to deliver blood plasma to victims of an explosion aboard the destroyer USS Turner (DD-648) in New York Harbor. Naval Aviation's first shipboard operations and initial experiments in developing a rescue hoist also employed the HNS-1.

It was Coast Guard officers who first recognized the advantages of the helicopter for search and rescue and anti-submarine warfare roles. With the Navy focused on combat operations during World War I,I Chief of Naval Operations Admiral Ernest J. King placed "the responsibility for the seagoing development of the helicopter [with] the U.S. Coast Guard."

When first delivered in late-1943, the two-seat HNS-1 Hoverfly was intended to serve only to train pilots, yet it soon assumed operational, research and development roles, participating in actual lifesaving operations and serving as the platform for developing hoisting equipment for search and rescue. In January 1944, an HNS-1 also made flights from the deck of the British freighter Daghestan, proving the utility of helicopters in operations at sea.

Development of the HNS-1 continued through World War II in both Atlantic and Pacific operating areas, with versions of the Hoverfly also used by Great Britain and the U.S. Army Air Forces, the latter employing one in a rescue under combat conditions in the China-Burma-India Theater. All told, the Navy procured 25 HNS-1s for service.