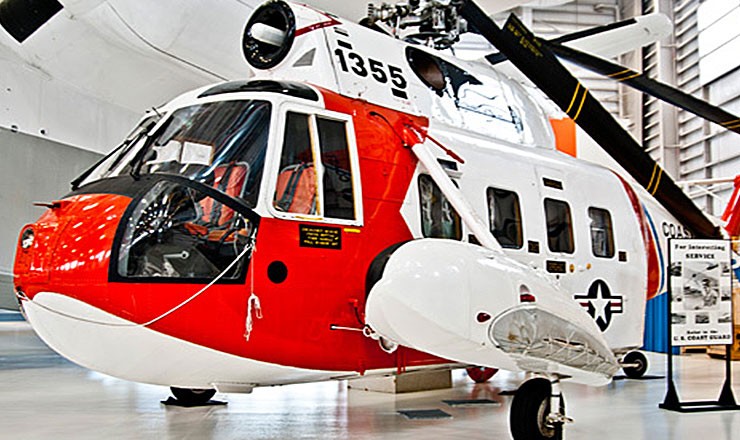 The HH-52 Seaguard served as the Coast Guard's premier search and rescue aircraft for nearly a quarter century following delivery in 1963. The HH-52 boasted a turbo shaft engine, which was lighter than the piston engines that powered earlier helicopter designs and increased horsepower, and featured a watertight hull and stabilizing floats that made it capable of landing on water or in deep snow.

In 1962 the Navy procured a number of Sikorsky S-62 helicopters for the Coast Guard to replace the HH-34. Initially designated HU2S-1G, the new aircraft was soon redesignated the HH-52 Seaguard. Though smaller, the HH-52 was similar in appearance to the Navy's SH-3 Sea King, and held the distinction of being the first turbine-engine rotary wing aircraft to be certified.

The HH-52 proved to be well suited for air-sea rescue in that it was fully amphibious with the main wheels semi-retracted into sponsons located on both sides of the fuselage. The helicopter also employed a folding platform along the side of the fuselage and a winch above the door, both of which facilitated hovering rescue.

The Museum's HH-52 entered service in 1963, and was operational until 1987. During its flying days, it accumulated over 13,737 flight hours and more than 800 search and rescue missions that saved over 600 lives. When retired from active service, it and two other HH-52s were the oldest operational helicopters in the Coast Guard.