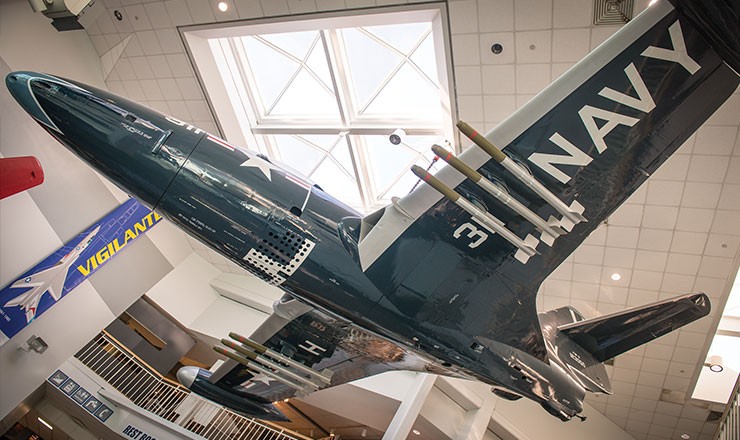 Grumman's first jet fighter, the F9F Panther was introduced in November 1947, but it wasn't until May 1949 that the first production models were delivered to the Navy's Fighter Squadron (VF) 51. The Panther saw its first combat on 3 July 1950, flying strikes from USS Valley Forge (CV-45). During the Korean War, the F9F was used extensively by both Navy and Marine squadrons, notably scoring the first jet vs. jet kill in U.S. Navy history on 9 November 1950. The Panther on display served with both Navy and Marine squadrons in Korea.

Grumman's entry to the jet age occurred in April 1946, with a Navy contract for a new night fighter. The company's G-75 design, soon to be designated XF9F-1, was delayed by the lack of an adequate power plant, with Grumman finally deciding to employ the successful Rolls Royce Nene engine, initially rated at 5,000 lb. static thrust. Changes in the original G-75 design produced the XF9F-2, a single-engine day fighter, first flown in November 1947. Several different power plants were tried, with the company settling on the Pratt & Whitney J-48-P6A and later, the P8 engine in the upgraded F9F-5.

The XF9F-2 first flew in November 1947, but production models did not reach the fleet until May 1949, with the first aircraft delivered to Fighter Squadron (VF) 51. The outbreak of the Korean War expedited production, with VFs 51 and 52 the first to see combat in July 1950, operating from the deck of USS Valley Forge (CV-45). At the same time, Marine Fighting Squadrons (VMF) 115 and 311 arrived in Korea.

Both Navy and Marine F9F squadrons were employed primarily in strike roles, though Navy Panther pilots achieved aerial victories against several North Korean and Chinese aircraft, the first of which occurred on 3 July 1950. A photo reconnaissance version, the F9F-2P, also saw extensive service in Korea. Earlier, the Navy showcased its new jet by equipping its flight demonstration team, the Blue Angels, with F9F-2s in 1949. The team subsequently formed the nucleus for the "Satan's Kittens" of VF-191, and deployed to the Far East for service in Korea.

The straight-wing F9F Panthers were eventually supplanted by swept wing F9F-6/8 Cougars, their final service coming as advanced jet trainers. The Museum's aircraft (Bureau Number 123050) finished its career in this role, but its previous service included Korean War combat flying missions with VMF-115 and VMF-311 and, in the final weeks of the war, operating with VF-151 from the carrier USS Boxer (CV-21).